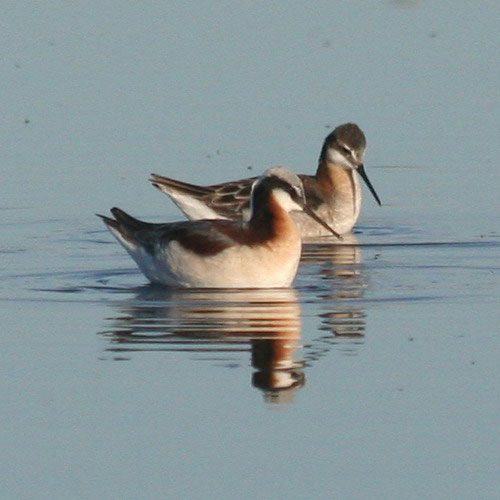 From mid-June to late August thousands of birds foraging on brine shrimp and fly larvae dot the large saline and alkaline lakes of the West with whirling, spinning patterns. Many of these are Wilson's Phalaropes who along with their cousins, the Red-necked Phalaropes, congregate in flocks of up to 100,000.

Phalaropes, meaning coot-foot in Greek, are so labeled because of their partially webbed toes. This unique attribute enables them to spin their bodies on water surfaces creating tiny whirlpools that concentrate their aquatic prey for easy pickings.

Named after the great early American ornithologist, Alexander Wilson, this species is the only one of the three phalaropes confined to the New World. It nests in shallow marshes primarily in the interior West and Great Lakes regions. One of few birds to undergo a post-breeding, molt migration, Wilson's Phalaropes then travel to several traditional sites.

On these large western lakes, they molt their feathers and build-up their fat reserves—often doubling their weight. Only then, armed with new feathers and a full tank of fuel, will they attempt their nonstop, 54 hour flight to central South America. Most will spend the winter in the saline lakes of the central Andean highlands, and smaller numbers will reach the lowland lakes and marshes of the Pampas and Patagonia of Uruguay and Argentina, as well as coastal Ecuador, Peru and Chile.

Phalaropes are among a handful of bird species that reverse the role of the sexes. Females are larger and more brightly colored than males. They often mate with more than one male, have more than one nest and, after egg-laying, they leave their families to the sole care of the males. Females even gather in flocks to aggressively compete for each single male. Although phalaropes are highly gregarious, females are territorial during the breeding period and defend their mates against other females.

Interestingly, recent research indicates that for many species of birds some offspring are fathered by neighboring males and not by the female's mate. However, a new study has found that in 17 Wilson's Phalarope families, all of the young were fathered by the male that raised them. For the average female, the "traditional" balance in her costs and benefits toward mate fidelity is upset by the switch in the roles of the sexes, thereby tipping the scales toward her rejecting any amorous advances by neighboring males.

Wilson's Phalaropes have probably declined in population due to the widespread destruction of prairie and western wetlands. However, recent trends have suggested a widespread expansion of the breeding range to the north and east. The population may not be increasing as birds may be searching for new areas to colonize due to drought and human-induced damage to their ancestral marshland nest sites.

The large populations that winter in South America are not known to be threatened there, but these same birds must return to only a select few lakes in the west for molting, and many of these, such as Mono Lake and Stillwater National Wildlife Refuge, are under stress from water diversion projects, drought and increased salinity.