Royalty of the Boreal Marshes 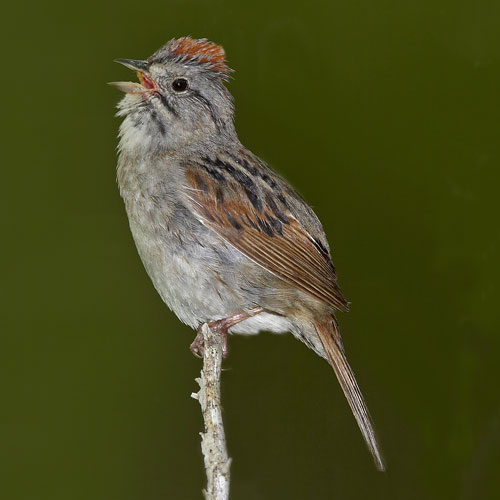 When birdwatchers list their most beautiful birds, the Swamp Sparrow is seldom, if ever, mentioned. In the world of ornithological aesthetics, sparrows get short shrift. They do not possess the vibrant and gaudy colors of a warbler, tanager, or toucan.

As is the case for many bird names, Swamp Sparrow is a misnomer. Swamp Sparrows don't live in swamps (wet areas filled with trees) but generally occupy marshlands dominated by grasses, herbs, and some shrubs. During the summer, marshlands from Maryland to the Northwest Territories teem with these busy, brown birds. 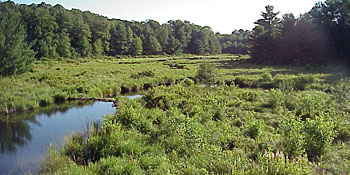 Territorial males move through dense vegetation to invade each other's territories and the sound of Swamp Sparrow 'growls' often fills the air. In good habitat, Swamp Sparrows are common—probably numbering in the millions of pairs throughout their range. However, in really good habitat (such as deep water marshes near beaver dams), they can be exceedingly abundant, with males defending postage-stamp sized territories. Because of this, Swamp Sparrows are often described as 'semi-colonial'.

Times are good for Swamp Sparrows, but it hasn't always been thus. Evidence from genetic analyses suggests that during the recent ice age, 10,000 years ago, Swamp Sparrows were found in a few, small populations. When the ice sheet retreated, Swamp Sparrows rapidly followed, colonizing the huge area of newly formed wetlands. In fact, the natural southern border of the breeding distribution of Swamp Sparrows often follows the line of maximum glaciation. Some populations breed south of this line, but usually in wetlands associated with human-made farm ponds.

The melting of the ice also resulted in the creation of the great estuaries of the east coast. The brackish tidal marshes of the Delaware and Chesapeake Bays, in particular, created a home for recently founded populations of the Coastal Plain Swamp Sparrow, which could be called the Tidal Marsh Sparrow. This subspecies has lost much of the bright rusts and buffs of the inland subspecies, presumably to match the grayer and blacker muds of the estuaries.

Swamp Sparrows are a bit more catholic in their habitat preference outside the breeding season. They still like marshes, but they also occur with other sparrows (particularly the closely related Song Sparrow) in a variety of damp, weedy habitats. Although widely distributed, with a few making it as far as coastal California each year, most tend to end up in the wetlands of the Gulf Coast. Swamp Sparrows are classic facultative migrants, traveling only when and as far as cold weather dictates. They can be found lingering in wetlands in the north until the first big freezes occur. Then most Swamp Sparrows head south.

In February and March, Swamp Sparrows molt feathers on their heads. In males this results in something that few sparrows acquire, a 'bright' spring plumage. This plumage consists of a bright rusty cap and strong blackish facial markings. This cap is what is known in behavioral ecology as a plumage badge. Preliminary evidence suggests that males with brighter crowns are more successful at attracting females and siring young.

Male Swamp Sparrows sing a simple song. However, as any jazz musician playing a modal vamp can tell you, simple can be deceiving. Swamp Sparrows sing a multitude of twists on the trill theme, varying tempo, pitch, and individual note structure to create dozens of song variations within a local population. As is common in temperate songbirds, each male has a repertoire of several songs. Because of the seemingly simple nature of its song, the Swamp Sparrow has been a model species for the study of song development. Much of the basic research on the nature of the sensitive period, when young birds acquire their song play-list, was focused on this species. 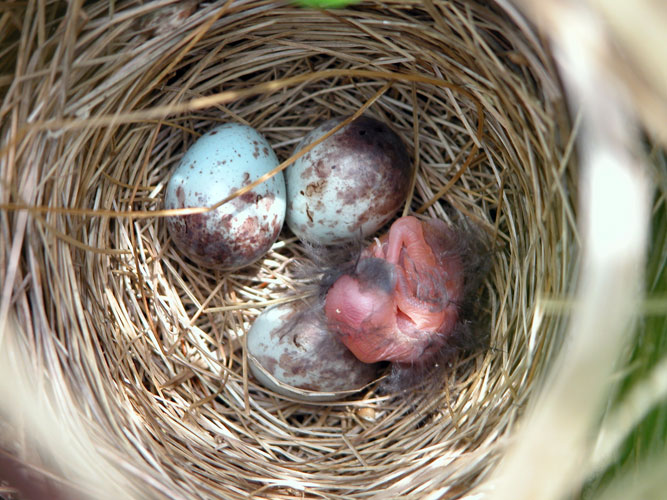 The really special vocalization of the Swamp Sparrow is not the song of the male. Females utter a loud series of chips as they leave a nest they have been incubating or brooding. This 'nest departure call" is the Rosetta stone of Swamp Sparrow biology. It allows ornithogists to find their well-concealed nests, which are grassy cups, hidden within tufts of grasses or sedges. Presumably they do not give this call to make the life of researchers easier. But why they give a call that gives away the location of their nest is a great mystery.

One clue is that the few other species that also have such a vocalization breed in dense marsh vegetation as well. One theory holds that the female is letting the male know she is leaving the nest and should not be attacked by her aggressive mate. The males might be prone to erroneous attacks because of the high density of sparrows and the thickness of the ground cover. 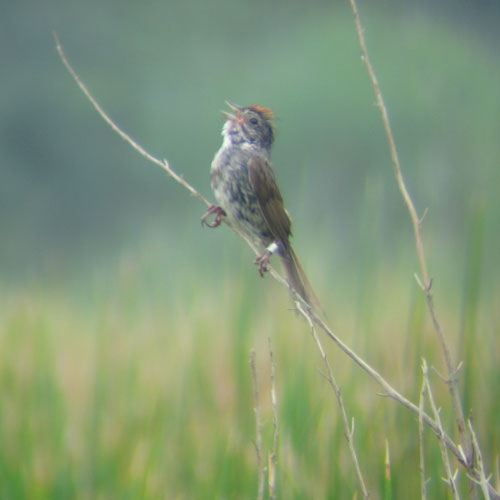 During the summer, one can occasionally glimpse them wading in shallow water (like a sandpiper) or hanging down to pluck an insect from the surface of the water. The Swamp Sparrows in tidal marshes scurry out to the edge of exposed tidal guts and pools to forage in the mud during low tides. Swamp Sparrows have narrower bills than most sparrows, suggesting that they eat more arthropods and fewer seeds; an inference that is supported by data on stomach contents.

Swamp Sparrows and Lincoln's Sparrows (a bird of boreal forests) are closely related, probably diverging from a common ancestor in the late Pleistocene. These two species are the closest living relatives of the Song Sparrow. The marsh-specialist Swamp Sparrow is, therefore, a close cousin of one of the most ecologically generalized and widely distributed of North American birds.

The world is full of ornithological mysteries. Some are found in the Amazon Basin or the mountains of New Guinea. Others skulk about in our own nearby wetlands. There is still much we do not know about this secretive denizen of North American marshes. What we do know is intriguing and beckons us to wade into the marshes.