Singing in the City or Country: How Urbanization Affects the Gray Catbird

What happens when a migratory bird’s path lands it right in an urban area like Washington, D.C.? The city is known for its extensive park system, but can these urban parks support wild birds through the breeding season? Moreover, how do birds’ natural behaviors change when they’re living the city life?

From late April through July 2017, a team from the Smithsonian Migratory Bird Center set out to answer these questions in the greater D.C. metro area. The team focused their efforts on gray catbirds, a migratory species whose favored habitat is forest edge, making it a staple for backyards.

Gray catbirds have long been a focus for SMBC, with many projects led by research scientist Brandt Ryder, and are one of many Neighborhood Nestwatch species, but there is still much to learn in terms of their migration, survivorship, reproduction and other behaviors.

Postdoctoral fellow Dana Moseley joined the SMBC team to work with Ryder and was particularly interested in how behaviors, such as birdsong and mate choice, might differ in very urban areas (like Washington, D.C.’s National Mall) compared to more rural areas (like Brookside Gardens in Maryland).

Multiple studies have shown that many bird species, including catbirds, vocalize at higher pitches when they are in noisier, urban areas. Researchers think this is because higher pitches escape some of the masking effects of low-pitch human noise, such as traffic and construction. Catbirds are an interesting case, because they are one of three mimic species of the mid-Atlantic region. Like the mockingbird, catbirds copy and imitate the songs and sounds of other species.

Moseley predicted that catbirds in rural Maryland may be copying sounds of orioles, warblers and red-winged blackbirds, while catbirds down at the National Mall might have a harder time finding natural sounds to mimic. Instead, urban birds may be singing their renditions of starlings and pigeons, or ambulances and car alarms!

But why would differences in “city” and “country” songs matter? Well, female catbirds use males’ songs, among other things, to make their mating decisions. Males show off to females by singing a wide variety of imitations. Scientists hypothesize that having a wide variety of songs may indicate to females that a male has more experience, that he has a bigger/better brain to memorize and reproduce songs or that he possesses good genes (possibly all of the above)!

Moseley is trying to determine if a link exists between differences in singing behavior and habitat along the urban-to-rural gradient. The catbird team made just under 300 recordings along the urban gradient from D.C. to Maryland at six sites. They found a surprising variety of background noise present, from the I-395 on-ramp at 9th street to lions roaring at the Smithsonian’s National Zoo.

In addition to affecting song behavior, city life may be difficult for catbirds in other ways, such as with nesting success. Moseley and her team, including intern Allison Huysman and volunteers Ella DiPetto and Kevin Ebert, caught and banded adults, juveniles and nestlings to determine each pair’s nesting success—how many offspring each pair raised until they left the nest. 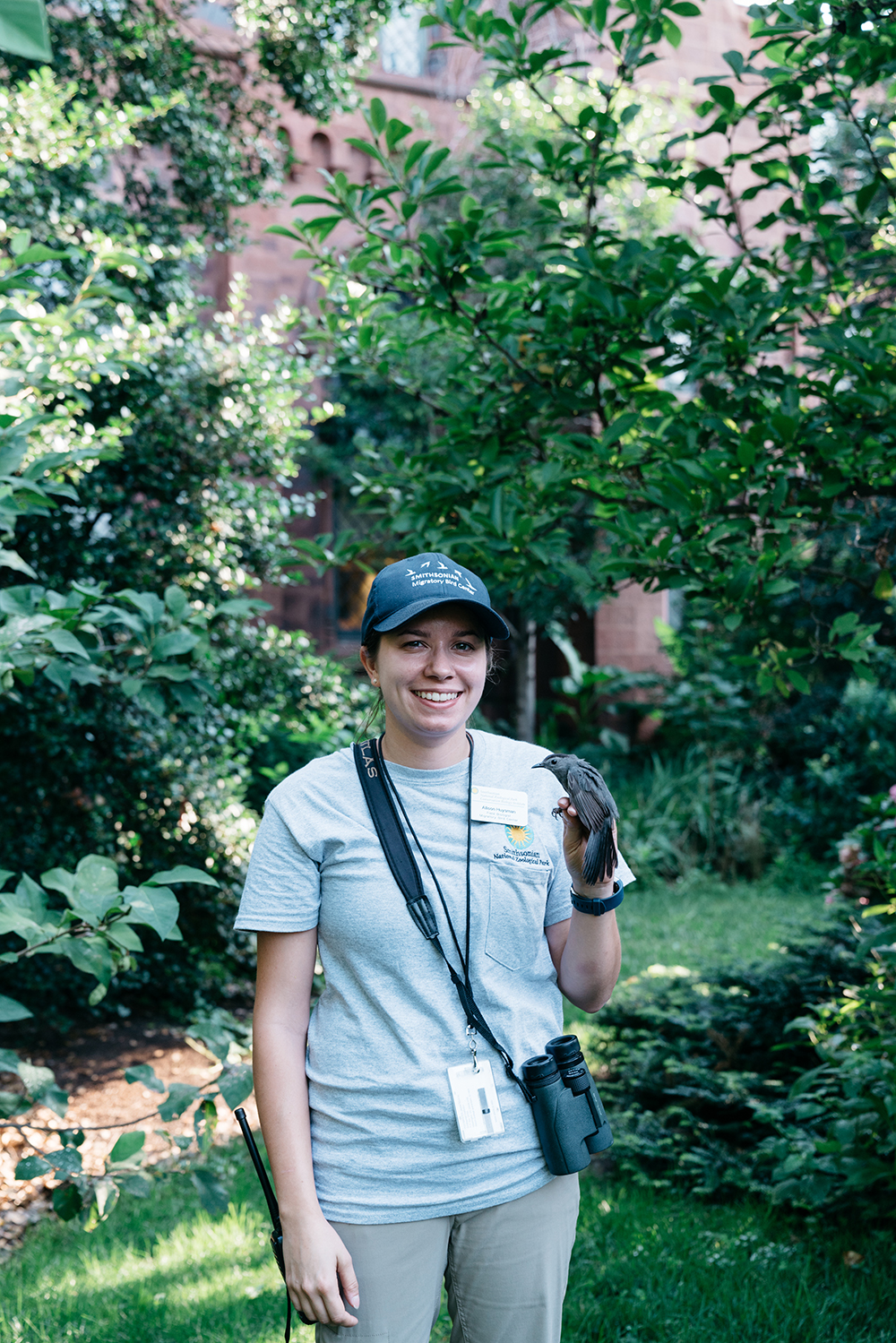 To dive further into this question, the team took tiny blood samples from parents and offspring to answer the daytime talk-show question of “Who’s the father?” Sometimes, male and female catbirds raising a nest of babies together have also mated with other birds. By not having all of their eggs in one basket, males can increase the total number of offspring they sire. Moseley will partner with SCBI’s Conservation Genomics Center to analyze 244 new blood samples taken from parents and offspring. The team will run paternity tests to determine how females made their mating decisions and link these results to aspects of the males they chose.

Data collected will integrate with other ongoing projects at the Smithsonian Migratory Bird Center that focus on backyard birds. Many of the birds in the behavior study have also been tagged with GPS locating backpacks that determine the specific locations a bird traveled on migration. From birds caught and tagged in 2016, scientists already know that catbirds in the D.C. metro area migrate to southern Florida, as well as places as far as Louisiana and Cuba!

Knowledge of migration routes deepens the understanding of behavior on breeding grounds, in terms of mating and nesting success. Putting these pieces together gives SMBC scientists a wider grasp on birds’ full annual cycles and the knowledge to better protect species, such as the catbird, whether right here in Washington, D.C., or all the way in Cuba.

Gray Catbirds
Researchers are studying the gray catbird to better understand how urban and suburban landscapes impact migratory birds.
Research
The Smithsonian Migratory Bird Center is the only scientific institution solely dedicated to studying migratory birds. These species fly thousands of miles every year from summer breeding grounds in the United States and Canada to warm winter homes in the Caribbean, Central and South America.