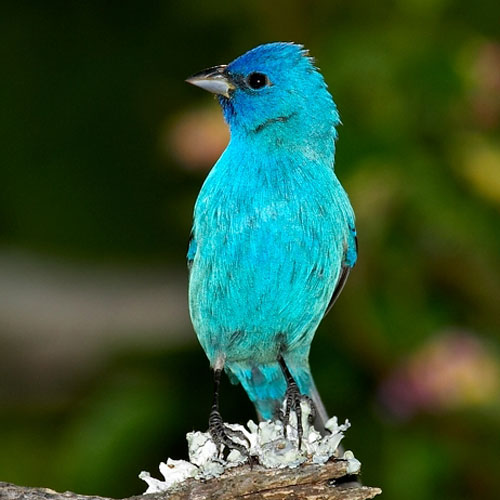 One constellation most people can recognize is the Big Dipper. Did you know that the two stars farthest from the handle of the Big Dipper point toward the Little Dipper, and that the last star in the handle of the Little Dipper is the North Star? Did you also know that the North Star is the star around which all other stars rotate, and that it is a reliable reference point for due north?

This is the kind of information that indigo buntings learn and rely on to get their bearings for migration. Read on to find out how this was discovered…

In the summertime, the high-pitched, persistent song of the dazzling male indigo bunting is a common roadside sound throughout the eastern United States and southeastern Canada. Because of an increase in this species' preferred habitat of abandoned fields, forest clearings, and brushy woodland edges (such as along roads and power line clearings), it is more abundant now than when the Mayflower docked at Plymouth Rock. Since the 1940's, its range has also been expanding into the southwestern United States.

As is typical in the bird world, the male indigo bunting is the more dapper and conspicuous of the sexes. Whereas it is not easy to catch a glimpse of the secretive, dull-brown female, it's hard to miss the cobalt blue male that often belts out his strident song from an exposed perch high in the tree tops.

Interestingly, the brilliant blue of male indigo buntings results not from pigment but rather from the diffraction of light through the structure of the feathers. This accounts for why in some lighting the males appear exquisitely turquoise blue, while in others they appear to be almost black.

Older male buntings are first to arrive on their North American breeding grounds in late April to mid May. They will have already staked out their territories by the time the females arrive about 2 weeks later. Within a day or two, each female will select a mate and settle on a particular territory where she will most likely remain throughout the season. Together each pair will raise as many as 3 broods.

Despite the appearances of monogamy, recent advances in genetic analyses have revealed that 20-40% of the buntings born in a season are fathered by males other than the holder of the territory in which the young are born.

Another fly in the pudding of nuclear family life is that about 15% of breeding males will have as many as 4 females on their territory, either simultaneously or over a season.

The females do most if not all of the feeding and caring for the young for the 9 to 12 days they are in the nest, although the male defends the nest against intruders. Once the young have fledged the males will tend to them, particularly if the female is busy building a new nest for the next brood.

If you've ever tried to learn to identify birds by song, you know that there is a lot of variation between the songs of individual birds within a species. You may never hear a bird in the wild that sounds exactly like the song recording you listened to repeatedly on your store-bought CD or tape. The individual differences in birds songs enable male birds within some species to distinguish one another.

For example, experiments have shown that territorial males respond differently to hearing tape recordings of a neighbor's song versus that of a stranger's song. In addition to individual variation there are also regional dialects which are detectable differences in songs within a species in different geographical locations.

In the case of indigo buntings, 80% of males learn their particular song by imitating an older male with an established territory during their first spring. Alluding to the adaptive value of this pattern of song learning, males that match an older, territorial neighbor's song their first year are more successful in attracting mates and fledging young.

Most likely this is because they are able to trick their competitors (other first year males) into mistaking them for the older, established male. Combined with the fact that males usually return to the same breeding territory each year, this song mimicry gives rise to local dialects in which the sequence of notes in the songs of neighbors is similar, and different from that of birds in other areas.

Between mid-August and November, with their breeding duties over for the year, indigo buntings group together in large flocks and abandon their northern quarters for the tropics. Traveling up to 2,000 miles, most indigo buntings settle for the winter anywhere from southern Mexico and the West Indies to northern South America.

A smaller number will spend the winter in southernmost Florida. At this time of year, the indigo buntings' alter-ego takes over. The males give their syrinxes (equivalent to human vocal chords) a few months hiatus, and they no longer sport their namesake shock of blue feathers. Instead they assume an overall brown plumage with few streaks of blue remaining, thus resembling the females.

Whereas their social life on the breeding grounds revolves around defended territories occupied by a single male and one or more females, loose flocks composed of hundreds or thousands of birds roost together by night and forage together by day while in the tropics. The main food of choice becomes seeds and buds, rather than insects and spiders which are the staple during the breeding season.

Studies of indigo buntings have shed light on one of the many mysteries surrounding bird migration—how birds select the appropriate direction in which to fly. In the 1960's, Stephen Emlen cleverly demonstrated in experiments conducted outdoors and in a planetarium that indigo buntings, like sailors of yore, use the pattern of the stars as a compass.

In his experiments, Emlen took advantage of a behavior pattern shown by migratory birds in captivity during the periods of time when their normal spring and fall migrations occur. Termed Zugunruhe, a German word meaning migratory restlessness, this behavior is characterized by increased activity, mainly hopping and fluttering of the wings.

By placing captive buntings in cages made out of a funnel of blotting paper with an ink pad as a floor and a see-through top, Emlen was able to determine that buntings with a view of the night sky oriented their Zugunruhe activity in the appropriate direction in which they would be migrating, i.e. northward under a spring sky and southward under a fall sky.

Without a view of the night sky, the birds activity became randomly oriented. This orientation of activity was apparent in the pattern of inked footprints left on the blotting paper sides of the cages.

By systematically covering up parts of the night sky within a planetarium, Emlen went on to show that the birds gauge direction using the pattern of stars nearest the North Star, the pivot around which all the stars rotate and a reliable reference for due north. He also was able to conclude that young buntings learn this pattern during their first summer.

Experiments done since then on a variety of species have revealed that the stars are but one of several cues that birds rely on for orientation. Other sources of information include the position of the setting sun and the pattern of polarized light it creates, the earth's magnetic field, odors, wind, and topographic features such as mountains and bodies of water.

One of the last birds to stop singing as the summer months draw to a close, the indigo bunting is one of our best known songbirds. As the subject of an impressive amount of scientific research, this stellar migrant has enabled us to advance our limited understanding of the mind-boggling capabilities of migratory birds, and allowed us to enhance our view into the curious world of avian social life.