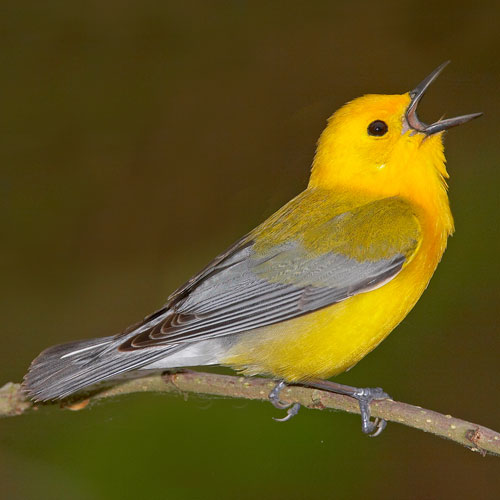 Bottomland forest on a hot June day. Dark and murky. Quiet except for the buzz of a million mosquitoes and the sounds of occasional splashes and bubbles in the tea-stained water.

Suddenly, a flash of golden-yellow darts across the background of muted greens and browns. The bird lands, throws back its head and belts forth a sound to make the forest come alive—"Sweet sweet sweet sweet sweet!" Welcome to the swampy realm of the prothonotary warbler.

Once dubbed the “Golden Swamp Warbler” because of its partiality to flooded forests, this striking warbler acquired its current name from 18th century Louisiana Creoles who thought the bird's plumage resembled the golden robes of the protonotarius, a Catholic church official who advised the Pope.

Early ornithologists had classified the warbler in the same genus as the waterthrushes, and later categorized the species as the sole member of its own genus, Protonotaria. The species name, citrea, refers to the lemon color of the bird.

The prothonotary is unique among the eastern warblers because it nests in holes in trees. Abandoned downy woodpecker holes are the most common nest sites, but the warbler will nest in a variety of natural cavities in dead branches, the broken top of a stump, or the "knee" of a cypress tree.

As with most cavity-nesters, the availability of suitable nesting cavities is the most critical habitat requirement for breeding prothonotaries.

Because of this, the species has been known to choose a whole slew of interesting and strange nesting sites, including the pocket of an old coat, tin cans, and the pulley on an active ferry. Often times the cavity sites chosen are not very well enclosed, and prothonotaries on rare occasions have been found to use abandoned nests of open-nesting species, such as the red-winged blackbird.

Cavity nest-sites are not the only habitat feature required by the species. Prothonotary warblers are rarely ever found far from some body of water, whether it be a slow running river or creek, a large wooded lake, their favorite flooded bottomland forests, or a low spot in the forest that maintains temporary standing water.

Even backyard ponds and swimming pools have attracted prothonotaries occasionally. This special attraction to water may be due to a higher number of decaying trees with nest cavities in flooded areas and the added benefit of lower predation by mammals when the nest-site is located over water.

Insect food for the growing nestlings is also abundant in flooded areas, especially when millions of mayflies emerge and provide the warbler and many other birds with an "all-you-can-eat" buffet. Nesting over water can have its down side, though. Because the warbler usually nests within a few feet of the water's surface, flooding often accounts for substantial nest failure each year.

Also, as poor-flying young fledge from a nest, they run the risk of landing in the water and becoming lunch for a turtle or a large-mouth bass. Luckily, fledgling prothonotary warblers have a nifty ability to swim! Many an ornithologist has observed young prothonotaries zipping across the water to a safe log or other structure.

Prothonotaries spend the nonbreeding season in southern Central America and northern South America, with their highest numbers in Costa Rica, Panama, and northern Colombia. There the prothonotary inhabits another watery realm, mangrove swamps. In the mangroves of Panama, the warbler can reach such high population density that early ornithologists described "swarms" of prothonotary warblers.

In contrast to their aggressive territoriality during the breeding season, wintering prothonotaries exhibit almost no aggression against each other as they forage in large groups for insects and small snails among the aerial roots of the mangrove trees. Male and female prothonotaries apparently sometimes maintain their pair-bond on the wintering grounds.

Data from the North American Breeding Bird Survey show that prothonotary warblers have declined overall at a rate of 1.5% annually since 1966. Steeper declines are evident in some regions where the bird reaches its highest abundances, such as in the lower Mississippi Valley.

Because of the warbler's very specific habitat requirements, threats to breeding and wintering populations take the form of wetland losses to logging and development in both the bottomland forests of North America and the mangrove swamps of Central and South America.

Birdwatchers don't often get a chance to see this beautiful golden swamp warbler unless they are in the appropriate habitat, making the sight of a prothonotary a memorable experience.

In fact, the sight of a prothonotary warbler along the Potomac River once made a birdwatcher named Alger Hiss so excited that he told a friend about his experience.

Unfortunately, the fact that Whittaker Chambers knew about the prothonotary sighting was one of the links that a freshman congressman named Richard Nixon used to prove that the two men knew each other, leading to the conviction of Hiss (a suspected spy) on a perjury charge. You might say that Nixon had the prothonotary warbler to thank for his subsequent rise to the Presidency!