The Troubled Blackbird of the Bog 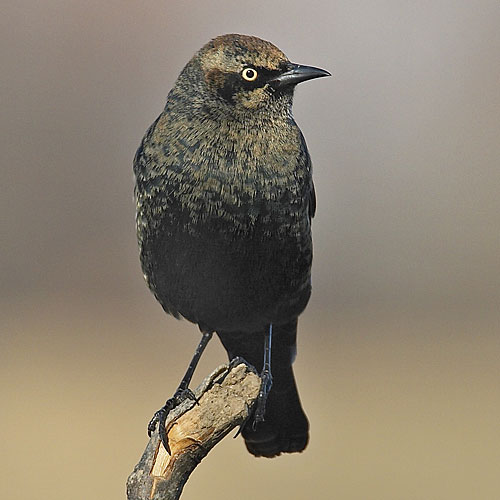 Once upon a time, you could, on a summer's day, count on hearing the creaky song of the Rusty Blackbird (Euphagus carolensis) filtering from the bog lands of the boreal forest. Decades ago, on a winter's day, one could reliably locate small flocks of Rusties foraging at the edge of the swamps in the southern United States. Now, most of us consider it special to see a Rusty Blackbird anywhere. The Rusty Blackbird is a species in deep, deep trouble.

5 years ago, we published a paper in Conservation Biology laying out the case for both acute short-term and chronic long-term population declines. Since then, the plight of the Rusty Blackbird has attracted but a small amount of interest.

The Rusty Blackbird is now considered a species of concern in a few regions by the Fish and Wildlife Service and nationally by Partners in Flight. But unlike other species in similar dire trouble, little in the way of serious concerted research has been initiated.

Several lines of evidence support the hypothesis that the Rusty Blackbird is a species in severe decline. First, a systematic comparison of authoritative regional accounts of bird distribution and annotated bird checklists from the late 19th century to today reveal a consistent pattern. The species has gone from being described as almost universally common or abundant to one where even in the center of its range it is uncommon or rare. Feedback from careful observers throughout the Rusty's range overwhelmingly indicates that this bird cannot be found nearly as reliably now as in the recent past.

In particular, renewed attention to the distribution and abundance of birds in boreal forests has caused many observers to revisit areas that have hardly been explored since the days of early ornithologists. Often these modern survey crews are able to detect only handfuls of birds in areas where they were formerly common and easy to find only a half century ago. We had this experience as we explored the bogs and woodlands of the Northwest Territories along the Liard and McKenzie River in the late 90s. More recently, reports from regions of northern Alberta have found a similar dearth of Rusties.

As part of the northern boreal fauna, Rusty Blackbirds are not well monitored. However, they have been found on over 90 Breeding Bird Survey routes. These data, when analyzed from 1966-2001, show a remarkable but depressing (and highly statistically significant) 10.8% annual decline. Similar declines can be seen in the Christmas Bird Count data from the same period. A number of other smaller-scale systematic surveys also show strong and consistent declines in recent decades.

Beyond the demonstrable population declines, the Rusty Blackbird has several strikes against it. First, it is an oddball blackbird. Blackbirds are comprised of several evolutionary clades of New World Icterids and are, for the most part, omnivorous and adaptable birds of open habitats. Because of these ecological characteristics, most blackbirds, such as grackles and Brewer's Blackbird, have shown profound increases as agriculture and suburbanization spread across the American landscape.

However, the Rusty Blackbird's specializations have restricted it to wooded wetlands where it forages primarily on invertebrate prey. Of all North American species, Rusty Blackbirds are the most tied to this kind of habitat. Unfortunately, not being a member of a glamorous group of threatened species, such as migratory songbirds that winter in tropical forests, Rusty Blackbirds stand alone and unappreciated (except by us, of course). Finally, Rusty Blackbirds' breeding distribution is located primarily in far northern, bog lands where few roads penetrate, access is difficult, and few bird surveys are conducted.

The contention that this species has been declining for over a century and is suffering from rapid recent declines seems to have solid support. What is unclear is the cause of these declines. Given the species' greater ecological specialization than its close blackbird relatives, it is tempting to assume that habitat destruction or degradation is at the root of the problem. However, the evidence for this explanation is mixed.

The wooded wetlands of the Deep South where it winters, have indeed disappeared from some regions and are highly altered elsewhere. While habitat loss and degradation due to acid rain in the boreal forest is significant in the eastern portion of its breeding range, huge tracts of boreal wetlands remain from central Canada west through Alaska. Alternatively, while Rusty Blackbirds tend to forage in small groups, away from other blackbirds and grackles, they often join their evolutionary relatives at large blackbird roosts. The past spraying of blackbird roosts may have contributed to their decline. Finally, in light of the recent West Nile Virus epidemic, the possibility that some disease has ravaged the population cannot be completely ignored.

Here now is a clear case of a decline, one shrouded in so many unknowns that no clear conservation/management strategy can be championed. We hope that another five years will not slip by before a serious effort is made to research the demise of this elusive maverick of the blackbird family. You do the math, 11% of the population lost per year?