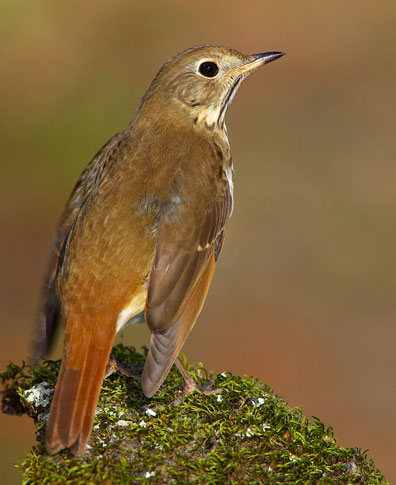 The sun is just about to rise on a cool December morning on the Eastern Shore of Maryland. The birds awaken at the forest edge and begin calling vociferously: the harsh "shack" call of the Northern Mockingbird, a variety of "chip" calls from cardinals, sparrows, and yellow-rumped warblers, and the squeals of robins as they fly overhead.

Carolina Wrens are singing loudly as woodpeckers trill. I hear the last hoots of a Great Horned Owl—this is their mating season and they are eager to advertise their presence. Crows caw as they leave their roost sites and geese honk as they return to theirs.

But amid the cacophony is a soft "chup" which is repeated again and again. Another bird answers then another, and soon the woods are alive with this gentle call. It is impossible to tell how many of these "chupping" birds are around me because their ventriloqual notes make it difficult to pinpoint them. This shy bird is the Hermit Thrush, the only spotted thrush that winters in the United States.

The sun finally peeks its rim over the horizon signalling the end of the dawn chorus. The birds have proclaimed their presence to each other, some seeking to find a feeding flock to join up with, others are reestablishing a winter territory. It is time to eat after a cold, foodless night.

The Hermit thrushes, which had seemed to be ubiquitous just a few short minutes ago, are now silent and invisible. I may not see one all day because their brown plumage blends into the dead leaves on the forest floor where they forage for hidden insects, or as they pluck berries from a dense grove of evergreen holly trees.

Although male and female Hermit Thrushes look the same, they tend to winter in different areas, with the males wintering farther north than the females. Being closer to the breeding grounds allows the males to arrive there as early as possible and to choose the best territories for nesting. In addition, males often migrate 3 weeks earlier than the females. The reward of prime nesting real estate is worth the cost of more difficult winter and migration weather conditions.

The Hermit Thrushes breed in the northern United States and Canada and southward along mountain ranges. It is here that one is most likely to hear the Hermit Thrush's exquisite song. Males sing from 6 to 12 different flutelike songs, and, as on the wintering grounds, they are most vocal before dawn and after dusk.

Several other species of spotted thrushes breed in the same areas as the Hermit Thrush. In more southern forests, these thrushes often divide up the forest so that the Veeries inhabit the lower slopes along streams, the Wood Thushes nest in the mid slope areas and the smaller Hermit Thrushes are restricted to the mountain tops. But in more northern forests the higher elevation habitats are favored by the Swainson's Thrush with the Hermit Thrush occupying lower areas.

Compared to its thrush relatives, the Hermit Thrush migrates earlier in spring and later in fall. It is most likely to be seen in urban and suburban areas during migration as it seeks shelter in dense shrubbery or visits a bird bath. They can be distinguished from other thrushes by their rusty tails, which are often raised and lowered when the birds are alarmed.