Winged Pirate of the High Seas 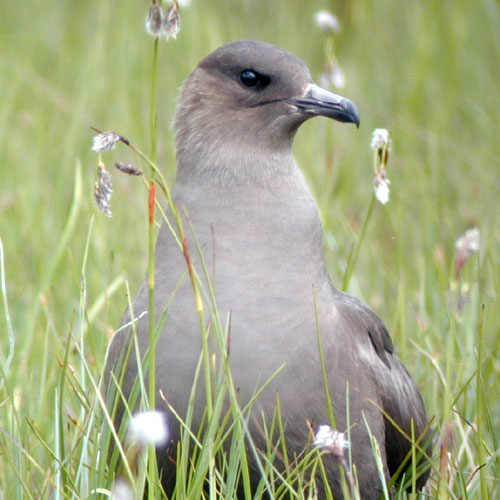 An Arctic Tern hovers high above the water, zeroing in on the fish it intends to take back to the nest to feed its ravenous young. With perfect precision, it dives head first into the water and is back in the air within seconds, the fish dangling from its bill. Urged on by parental instinct, the tern resolutely heads to shore.

Suddenly, the tern is struck from above with such force that it teeters in the wind and almost drops its prey. Glancing up, it sees its arch nemesis: the daring and fierce Parasitic Jaeger. The tern flies with all the speed it can muster, but from below comes the masked face of yet another jaeger, this one trying to snatch the fish from its bill. A quick bank to the left allows the tern to elude this attempt, but the jaegers persist. A high-speed chase ensues as the tern tries vainly to out maneuver the relentless pair of jaegers. Unable to evade them, the tern drops its prey as one of the winged pirates somersaults to catch the falling booty in mid-air. The aerial swashbucklers drift away in the wind, and the harried tern must hunt again.

The Parasitic Jaeger is aptly named for the two main strategies it uses to acquire food. The first half of the name refers to the species' proclivity for stealing food from other birds - a habit termed 'kleptoparasitism' in scientific jargon. The second word comes from the German word for hunter, alluding to the predatory alter-ego of this aggressive and acrobatic bird of the high seas. In Great Britain, where much of the research on this species has been done, the Parasitic Jaeger is much less descriptively known as the 'Arctic Skua' ('skua' comes from the Old Norse term for seagull).

For some Parasitic Jaegers, kleptoparasitism is the feeding strategy of choice throughout the entire year. These birds specialize in harassing other birds, relentlessly pursuing them in mid-air and forcing them to relinquish their food. Once dropped, the jaeger deftly swoops down to catch the food before it strikes the ground or water. Prime targets are seabirds that nest in large colonies along the coast. Terns, gulls, murres, kittiwakes, puffins and others are waylaid as they return to their nests with crops or beaks full of food for their young.

Other jaegers are part-time pirates, preferring to hunt and capture their own prey during the breeding season. This strategy is used by the Parasitic Jaegers that nest in inland regions of northern Alaska and Canada. Here jaegers defend large territories within which they hunt mainly small birds and eggs, but also small mammals, insects, and fish. Once freed from the responsibilities of parenthood, these hunters re-join the rest of the species in stealing food from other birds.

Parasitic Jaegers have the overall appearance of a gull, but the long, pointed wings of a falcon. Like other jaegers, the two central tail feathers of adult birds in breeding plumage extend several inches beyond the rest of the tail. With a body length of about 20 inches and a wingspan of 42 inches, the Parasitic Jaeger is the mid-size member of the jaeger family, which also consists of the larger Pomarine Jaeger and the smaller Long-tailed Jaeger. Of the three species, the Parasitic Jaeger ventures closest to shore while migrating and is therefore the one most likely to be seen from land in southern Canada or the United States.

Jaegers spend the majority of their lives at sea, coming to land only to breed. Upon leaving their birthplace, many young birds will spend the entire first two years over open ocean before returning to the Arctic to nest. While at sea, the birds lead a mostly solitary life, sometimes ganging up opportunistically with other jaegers to jointly pester other birds for their food. During the summer months in the northern hemisphere, Parasitic Jaegers breed across the Arctic polar region of the globe. In the Americas, they nest along the Alaskan coast and Aleutian Islands and across the tundra of northern Canada. They also nest in northern Europe and Asia.

At other times of the year, these migratory seabirds fan out across the oceans of the southern hemisphere. Because of the difficulty in distinguishing the three species of jaegers, particularly when they are not in breeding plumage, their whereabouts outside of the breeding season is not well known. It is thought that Parasitic Jaegers most commonly winter off the coasts of South America, South Africa, and Australia. They have also been spotted in the Sargasso Sea, the Gulf of Mexico, and the Caribbean.

Adult Parasitic Jaegers come in two basic varieties, or 'morphs', distinguished by color. There is both a light morph and a dark morph, as well as intermediate types. The light morphs have white underparts from throat to belly, often with a partial or complete brown band across the breast. They are brown across the back and tail with a blackish cap and white collar.

Dark morphs are similar except the white areas on head and underparts are replaced with brown. Intermediates vary widely, however they mostly resemble the dark morphs. This color variation, referred to in the scientific literature as 'plumage polymorphism', has been the subject of extensive research, making this species one of the most studied of all seabirds.

Much of this work has focused on figuring out why the color variations exist and persist in such stable proportions. It has also focused on why the percentage of dark to light morphs varies according to latitude, with dark morphs increasing in predominance from north to south throughout the breeding range. In some southernmost populations, dark morphs can account for more than 75% of individuals, compared to less than 25% in the northernmost part of the range.

The reason for this latitudinal pattern has so far proven to be a scientific stumper. Presumably, there is an advantage to being pale in the north and dark in the south, but determining what it is remains elusive. No correlations have been found with respect to success in hunting or stealing food or survival. However, at least within some populations there are some distinct patterns in terms of breeding success of dark versus pale morphs.

On Fair Isle in Scotland, research has shown that females prefer dark males. This is evidenced by the fact that dark males find mates, begin nesting, and have their eggs hatch earlier in a season than do pale males. Earlier breeders tend to be more successful breeders.

Given the edge that dark males have over pale males, one would expect that over time the proportion of pale birds would diminish, but proportions remain relatively stable. A debated explanation for this holds that pale birds persist because of immigration of pale birds from further north, where being lighter in color confers some undetermined advantage.

This formidable, feathered pirate that travels the globe harassing other birds elicits both awe and disdain from human observers. Researchers agree that more work must be done to sort out the mysterious case of plumage polymorphism in this species. And the debate will continue as to whether these menacing, swift and efficient predators are lazy for not always hunting their own prey or clever for letting others do their work.