8th Annual 'Brew at the Zoo' Tickets Now on Sale

Tickets are now on sale for the annual Brew at the Zoo event, held on Thursday, July 11, 2013 from 6 to 9 p.m. Hosted by Friends of the National Zoo, the beer tasting fundraiser showcases craft and microbrewers from around the nation, all in support of wildlife conservation. Being able to taste over 60 brews from some amazing craft and microbreweries, all in the park-like setting of the Smithsonian's National Zoo, really sets this event apart, said Robert Lamb, Executive Director of Friends of the National Zoo. Where else can you drink beer and support wildlife?

More than 60 breweries from around the U.S. will travel to D.C. for the beer tasting extravaganza. Local favorites such as Port City Brewing Company and Starr Hill Brewery will be joined by popular microbreweries including Abita Brewery, Devils Backbone Brewing Company, Flying Dog Brewery, and New Belgium Brewing Company.

VIP ticket holders are invited to mingle in the exclusive VIP area where they will receive full pours of beer and complimentary food tastings by local gourmet restaurants including Belga Café, Matchbox, and Meridian Pint. In addition to receiving a Brew at the Zoo takeaway gift, VIP guests will get to enjoy special animal demonstrations and will be granted early admission to the event before the general public. VIP tickets are $85 for FONZ members and $100 for nonmembers. General admission tickets are $50 for FONZ members and $65 for nonmembers. Early admission add-ons are also available for purchase. You must be at least 21 years old to attend this event.

In addition to sampling great hops, guests will be able to purchase culinary offerings from popular local food spots including Ledo Pizza®, Red Hook Lobster Pound Food Truck, and Pepe Food Truck. Between sampling beers and noshing on tasty food, guests will be able to mingle with new and old friends as they play games and take in the live musical entertainment by Gonzo's Nose.

Proceeds from the Brew at the Zoo event go toward animal care and conservation at the Smithsonian's National Zoo and around the world. Now that's something worth toasting!

The 2013 Brew at the Zoo is sponsored by Macy's, TDI, Pongos Interactive, Hot 99.5, and Washington City Paper.

Tickets are now available for purchase through Ticketmaster or at the Visitor Center Information Desk and Membership Office between 9 a.m. and 4:30 p.m. (Please note space is limited and the event typically sells out, so please purchase tickets early.) For details about the event, please visit the Brew at the Zoo page. 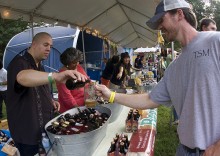