The Smithsonian's National Zoo is celebrating the birth of two Andean bear cubs born to 8-year-old Billie Jean Nov. 10 and 11. The Zoo announced Nov. 6 on its website, Facebook and Twitter that animal care staff observed two cubs on Billie Jean's ultrasound. Twenty-one-year-old male Cisco is the father. He came to the Zoo in September 2013 from the Queens Wildlife Center per a breeding recommendation by the Association of Zoos and Aquariums' Species Survival Plan.

Billie Jean is once again proving herself to be an attentive mother, said Karen Abbott, animal keeper. Right now, the best support we can give the family is to watch them from a distance and provide Billie Jean with a peaceful, quiet spot to nurse and bond with her young.

Animal care staff is closely monitoring the mother and cubs via a closed-circuit camera, allowing Billie Jean to care for her cubs without interference. Both cubs are active and vocal, and staff is cautiously optimistic that the cubs will thrive. Andean bear cubs have a high mortality rate, with first-year mortality at 41 percent for males and 44 percent for females.

Billie Jean and Cisco bred in April. However, it is difficult to pinpoint exactly when Billie Jean became pregnant because reproduction in this species involves delayed implantation. The blastocyst (fertilized egg) does not attach to the uterine wall until several months after breeding occurs. Zoo veterinarians and keepers began conducting ultrasounds in late August. In mid-October, an ultrasound revealed two live fetuses that appeared to be developing well. It will be at least two months before keepers and veterinarians can determine the cubs' sexes.

The birth of these cubs is significant for the population of Andean bears in human care. They are one of four litters born in North American zoos in the past nine years. Zoo staff is hopeful that Billie Jean will exhibit the same maternal instincts she did in January 2010 and December 2012, when she proved to be an excellent mother to Bernardo, Chaska, Curt and Nicole. Both litters provided animal care staff the rare opportunity to learn about Andean bear reproduction and cub development. Animal care staff is sharing the information gathered from this litter with AZA for the benefit of other institutions that exhibit and want to breed this species.

Zoo visitors can see 2-year-old bears Curt and Nicole, as well as Cisco, on exhibit near the lower entrance to American Trail, weather permitting.

Andean Bears are listed as vulnerable on the International Union for Conservation of Nature's Red List of Threatened Species, and it is estimated that there are only 2,000 left in the wild. They are South America's only bear species, and as their name suggests, they live in the Andes mountain range from western Venezuela south to Bolivia, with sightings reported from eastern Panama and extreme northern Argentina.

Please note: Reporters will not be able to come to the Zoo for photos or video. Billie Jean will stay inside with her cubs, and if the cubs are healthy and thrive, all three will go out in the yard this spring. 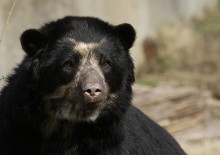