Asia Trail keepers at the Smithsonian’s National Zoo are mourning the loss of Peaches, a 7-year-old female Asian small-clawed otter who was humanely euthanized March 11. Over the past eight months, animal care staff had been treating Peaches for a cancerous mass located on her tongue and soft plate. A final pathology report will provide more information in the coming weeks. Typically, Asian small-clawed otters live up to 12 years in zoos; their median life expectancy in the wild is unknown.

Keepers and veterinarians worked extensively with Peaches to manage her health and provide her with the highest standard of care. Animal care staff discovered a mass in Peaches’ mouth in August 2018. Zoo pathologists confirmed the tumor was squamous cell carcinoma, a type of cancer. In response to the diagnosis, Zoo veterinarians administered electrochemotherapy treatments, which greatly reduced the size of the mass in the front of her tongue. The novel treatments extended Peaches' survival by several months. Despite ongoing treatment and care, Peaches’ quality of life declined. Due to her poor prognosis, animal care staff made the decision to humanely euthanize her March 11.

Peaches arrived at the Smithsonian’s National Zoo in 2012 from the Santa Barbara Zoo in California. Most Zoo animals participate in the Association of Zoos and Aquariums’ Species Survival Plan (SSP). The SSP scientists choose which animals to breed by considering their genetic compatibility, personality, health and temperament, among other factors. Rather than breed, Peaches served as an ambassador for her species, teaching Zoo staff and visitors about Asian small-clawed otter biology, behavior and socialization.

Asia Trail keepers fondly remember Peaches as a very social otter who was very closely bonded with her siblings, Rutabaga and Kevin. The three otters were frequently seen playing together, though Peaches also had an independent streak. She often busied herself by exploring the habitat they shared. In particular, she seemed to enjoy playing with rocks in the exhibit, tossing them back-and-forth between her forepaws.

Asian small-clawed otters are classified as vulnerable by the International Union for Conservation of Nature. Native to southern India, southern China, Southeast Asia, Indonesia and the Philippines, this species lives in small streams, rivers, marshes, rice paddy fields, seacoasts and mangroves. Scientists consider these animals an indicator species, as they are highly sensitive to habitat disturbances such as human development, aquaculture, pollution and other ecosystem modifications. Asian small-clawed otter populations are declining largely because of these factors.

Visitors to the Smithsonian’s National Zoo can see Asian small-clawed otters Rutabaga and Kevin, as well as their father, Chowder and an unrelated female, Valerie, at the Asia Trail exhibit. 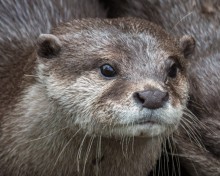