Births Include the First Red Siskin Chick To Hatch at the Research Facility
May. 17, 2017

The Smithsonian Conservation Biology Institute (SCBI) is celebrating the upcoming Endangered Species Day (May 19) with a slew of new births of endangered and vulnerable species. The births have ranged from mammals to birds, and some of the new arrivals will be reintroduced to the wild later this year.

Two loggerhead shrike chicks hatched April 4. The chicks have fledged and are doing well. The species—also known as butcher birds for their behavior of impaling prey on thorns and barbed wire—was once common across North America. Their populations have fallen by 70 percent. SCBI scientists are working with wildlife biologists in Virginia and West Virginia investigating possible causes for the decline. In the past, chicks born at SCBI have been transferred to the Toronto Zoo in Canada to enter its reintroduction program for loggerhead shrikes. Scientists have not yet determined if the two chicks born this year are candidates for reintroduction.

For the first time ever, SCBI is home to a red siskin chick—one of the most endangered birds on the planet. The chick hatched between April 10 and 11. Two other chicks hatched around the same time but did not survive longer than a few days. The birds were the first to hatch since the species arrived at SCBI in 2015. SCBI and the Smithsonian’s National Museum of Natural History, along with partners in Venezuela, are working to build a self-sustaining population of red siskin that can eventually be reintroduced to the wild. Red siskin are songbirds native to South America, named after their fiery-red plumage. They are endangered due to threats from the pet trade and habitat loss.

A white-naped crane chick hatched April 26 and is the 43rd to hatch at SCBI. This chick is the second for parents Brenda and Eddie. SCBI specializes in producing chicks from cranes that have behavioral or physical impediments that prevent them from breeding. The chick’s parents are one of the only white-naped crane pairs living at the research facility capable of breeding naturally. There are an estimated 5,000 white-naped cranes living in the wild, and the species is listed as vulnerable by the International Union for Conservation of Nature (IUCN).

litter of seven black-footed ferret kits was born May 2 and is doing well. They were born blind and with thin white hair covering their bodies, but they will develop their dark facemask markings by the time they are three weeks old. Their eyes will open by the time they are 3 weeks old, and kits are usually living independently by the autumn. Black-footed ferrets born at SCBI are routinely reintroduced to the wild each year.

Two maned wolf pups were born May 4 to first-time parents Layla and Santiago. Parents and pups are doing well. Keepers and veterinarians will determine the pups’ sexes and give them a more thorough exam when they are 6 weeks old. Maned wolves are omnivorous canids that live in loosely monogamous pairs and are listed as vulnerable by the IUCN. Their main threat is habitat loss.

A Przewalski’s horse foal arrived overnight May 9. The filly and her mother Maja are doing well and currently living separately from the rest of the herd of female Przewalski’s horses at SCBI. Forty foals have been born at SCBI since the species first came to the facility in 1983. SCBI scientists are monitoring Przewalski’s that have been reintroduced to the wild in China and Mongolia using satellite tracking collars. Przewalski’s are the last wild species of horse. The tan stocky horses were once extinct in the wild. All of the Przewalski’s horses alive today descend from 14 founders.

A scimitar-horned oryx calf was born overnight May 15. The calf and its mother appear to be doing well. Keepers and veterinarians will perform a neonatal exam on the calf in the coming days to determine the calf’s sex and ensure it is healthy. The calf will nurse from its mother for about six months. Scimitar-horned oryx were extinct in the wild until a reintroduction project led by the Enviroment Agency—Abu Dhabi and the government of Chad began last year. SCBI scientists are tracking the 37 animals that have been reintroduced to the grasslands of Chad with satellite collars. Before the satellite collars were fitted on the reintroduced oryx, they were tested on SCBI’s own herd. Two more groups of oryx are expected to be reintroduced to Chad this summer, bringing the number of animals living in the wild to nearly 100. Three calves have been born in the wild since reintroductions began. 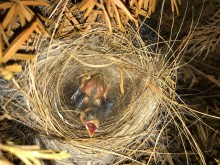 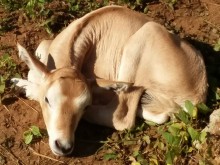