Giant panda cub Bei Bei is recovering nicely following emergency surgery to remove an intestinal blockage — a lemon-sized mass of chewed up bamboo. Following the successful procedure, Zoo staff returned Bei Bei to the David M. Rubenstein Family giant panda habitat. Keepers were encouraged to see that he moved well and was bright, alert and engaged during their interactions. To kick-start his digestive system, keepers served Bei Bei small portions of his favorite soft foods throughout the day: apple slices, leave-eater biscuits soaked in water and bites of sweet potato that contained antibiotic and antacid medications. He heartily ate what he was given, and urinated and defecated normally. To minimize his movement, Bei Bei was separated from Mei Xiang, initially. The pair has been reunited, but animal care staff are taking extra precautions to ensure Bei Bei is eating only his modified diet. Bamboo would be too difficult for his digestive system to process at this time, so keepers separate Mei Xiang and Bei Bei while they are eating. Zoo visitors can see Bei Bei on the Giant Panda Cam.

Stay up-to-date on the latest news from the Giant Panda House as Bei Bei recovers from successful bowel surgery.

This update was written by giant panda keeper Nicole MacCorkle.

Bei Bei is continuing to recover well from his major surgery, and he started eating small amounts of bamboo again a few weeks ago. He now gets several meals of leaf eater biscuits, sweet potatoes and apples, and several bamboo feedings every day. He eagerly consumes all his food—much as he has since he was born. As part of his recovery process, we are still closely monitoring all of his food consumption, not just bamboo. And as a result, he is staying inside where we can more closely control and regulate what he eats. He will start going outside again soon, but we need to be sure that he doesn’t nibble on too much grass, leaves or other vegetation when he does.

Until Bei Bei is cleared to go outside by our veterinarians and nutritionists, he will spend his time inside the panda house—a place he is very familiar and comfortable with and has been spending time in since he was born. In addition to his feedings, he also is given several enrichment (play) items every day. He is a very flexible animal, and has adjusted remarkably well to all of the changes in his routine.

One of the ways we monitor Bei Bei is by his fecal production; it helps us determine how his gastrointestinal tract is recovering. So far, his stools have been normal and look like miniature versions of Mei Xiang’s. His weight is also a good indicator of how he’s feeling. He now weighs 109 pounds; he’s gained more than 10 pounds since his surgery—all good signs for a growing bear.

Now that Bei Bei is 16 months old and weighs more than 100 pounds, Mei Xiang is weaning him, which is completely normal.  She does not always allow him to nurse as much as he might like, but he does not depend on her for his nutrition any longer. We noticed in the first few days following surgery that Mei Xiang seemed to be gentler with Bei Bei and even allowed him to nurse more than normal, but their relationship has returned to what it was before his surgery.

When Bei Bei is ready to go outside again, we’ll be sure to let everyone know. In the meantime, you can visit him inside the panda house.

As Bei Bei recovers from surgery, his diet is slowly returning to normal but he still needs to wait until he can eat bamboo. However, he continues to gain weight, and has crossed the 100-pound (45 kilos) mark. While Bei Bei continues his recovery, we have adjusted Mei Xiang’s schedule to ensure that she still gets an adequate amount of bamboo each day. During the day, Bei Bei happily eats and rests inside while Mei Xiang is fed outside in the yard.

Prior to Bei Bei's surgery, our normal panda routine was to do a large bamboo feeding at the end of the day to see them through the night. Now, with Bei Bei’s diet restrictions we can’t put any bamboo in the indoor enclosures, and overnight is too long to leave Mei Xiang without bamboo. The solution is to feed Mei Xiang her bamboo outdoors only, and to lengthen her day, so she is only without access to bamboo for a few hours.

Originally, keepers were staying round the clock, both to monitor Bei Bei and to provide bamboo feedings for Mei Xiang. As the days passed and Bei Bei no longer required round the clock care, we realized that Mei Xiang really wasn’t interested in eating much bamboo overnight anyway. So, we gradually began increasing the time between the last feeding of the evening and the first of the morning until we arrived at the current schedule, which seems to be working well for everyone. We provide Mei Xiang at least five outdoor bamboo feedings each day while Bei Bei rests indoors.

This is the time in Bei Bei’s development where he continues to spend more and more time apart from his mom, so both are unfazed by this schedule. This is also the time of year where the temperatures drop, but the pandas are loving it!  This is panda weather, and they are well equipped to deal with the cooler temperatures.

Both Bao Bao and Tian Tian are paying little attention to the schedule changes going on around them.  They continue to be on their own eating, sleeping and playing schedules. 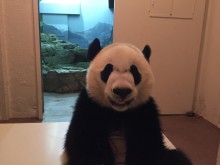