Sydney, a 3-year-old Bennett’s wallaby, died Sept. 20 at the Smithsonian’s National Zoo. Keepers had noticed earlier that week that he did not have much of an appetite and was losing weight. As a result, he was transported to the Zoo’s veterinary hospital Friday, Sept. 20, for an exam.

During the exam, veterinarians discovered that he had an inoperable mass in his stomach that had been causing his lack of appetite and weight loss. Due to his poor prognosis and rapidly declining quality of life, veterinarians and keepers made the difficult decision to euthanize him. A necropsy report may provide more details about the cause of the mass.

According to keepers, Sydney enjoyed interacting with his keepers and was a good companion to the three other wallabies he lived with. Sydney had fathered a female wallaby joey named Lenah, who also lives at the Zoo. Visitors can see Lenah and the Zoo’s adult female wallabies, Victoria and Adelaide, adjacent to the Small Mammal House.

Bennett’s wallabies are native to the eastern coast of Australia, parts of South Australia and Tasmania. They are listed as a species of “least concern” by the International Union for Conservation of Nature. 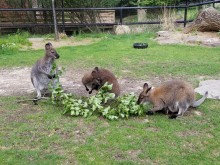