For the first time in 25 years, staff at the Smithsonian's National Zoo are making preparations for the highly anticipated birth of an endangered Bornean orangutan. With a breeding recommendation from the Association of Zoos and Aquariums' Species Survival Plan (SSP), the 19-year-old parents to be, female Batang and male Kyle, bred in January. On Feb. 2, a common human pregnancy test confirmed that Batang had successfully conceived. Earlier today, the Zoo announced Batang's pregnancy through a broadcast via Facebook Live of her ultrasound; it will continue to provide weekly updates on Batang through Facebook, Twitter and Instagram using the hashtag #OrangutanStory.

Zoo veterinarians have conducted bi-weekly ultrasounds since Feb. 2 and are encouraged that the ultrasounds have shown fetal growth and development, heightening hopes that Batang will give birth for the first time. They are cautiously optimistic that she will deliver a healthy baby around mid-September. However, just like any animal pregnancy, there is a possibility that miscarriage, stillbirth or a complication could occur.

All of our perseverance and planning paid off when we confirmed Batang's pregnancy, said Meredith Bastian, curator of primates and member of the Orangutan SSP Steering Committee. Watching her fetus develop over the past few months has been incredibly exciting, and we're making every effort to ensure our efforts come to fruition.

For the past three years, keepers have been acclimating Batang to the experiences of motherhood and training her to care for an infant. Building upon behaviors Batang has learned through routine training sessions, keepers presented her with a plush, bean-shaped pillow and an orangutan stuffed animal to simulate a baby. Keepers trained her to hold the fake baby upright, carry it around the enclosure and return the pillow baby to keepers through a specially designed baby box when asked. Should animal care staff need to evaluate a real orangutan baby's health, this training would help staff retrieve the infant in a way that is safe and not stressful for the animals. Batang has also been trained to use a breast pump for milk collection in the event she is unable to successfully nurse.

Training increases the likelihood that orangutan mothers will care for their infants said Becky Malinsky, assistant curator of primates.This training is especially important for a first time mother, like Batang. It is our goal for the infant to be raised by her mother, learning how to be an orangutan from Batang and the other orangutans at the zoo.

In the event that Batang is unable or unwilling to care for her infant, keepers are training females Bonnie and Iris to act as surrogate mothers. They receive similar training to Batang, but with a slight twist: keepers ask them to bring the pillow baby and present it to the keepers for bottle feedings. Batang is also trained to present the infant for bottle feedings if she is unable to nurse. As a last resort, keepers will prepare a nursery in the event it is necessary for them to hand-raise the baby with the goal of returning the infant to its mother or surrogate as soon as possible.

Native to Indonesia, orangutans live in the tropical rainforests of Borneo and Sumatra. For the past seven decades, humans have cleared land that was originally orangutan territory in order to meet the growing demand for palm oil products, fast-growing pulp wood and food crops leaving orangutans in competition with one another for space, food and mates. Scientists estimate that in the past 75 years, the number of wild orangutans has decreased by 80 percent. The International Union for Conservation of Nature lists the Bornean orangutan as endangered and the Sumatran orangutan as critically endangered.

Visitors can see the Zoo's six orangutans daily at the Great Ape House and the Think Tank. At the Great Ape House, visitors can meet a great ape keeper to learn about the fascinating world of apes at 11:30 a.m. daily. At Think Tank, staff and interpretive volunteers perform daily demonstrations and lead discussions on research in cognitive science, highlighting current and ongoing National Zoo studies at 1:30 p.m. Visitors can also see the orangutans traveling on the O-Line on warm-weather days in the late morning and early afternoon. 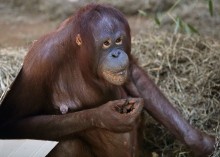