The herd of scimitar-horned oryx is growing at the Smithsonian Conservation Biology Institute (SCBI) in Front Royal, Virginia. Keepers have welcomed five calves during the past month. The calves were born between June 23 and July 1. Four of the calves are male, and one calf is a female; they all appear to be healthy and thriving.

The calves were born to Leanne, Ruby, Chari, Scout and Shadow. All are experienced mothers except 3-year-old Leanne who is a first-time mother. The father to all five calves is 12-year-old Tex. The mothers and Tex were on a breeding recommendation through the Association of Zoos and Aquariums’ Species Survival Plan. Veterinarians and keepers performed initial neonatal exams within 24 to 48 hours after each calf was born. Veterinarians visually checked, weighed, measured, collected a blood sample and vaccinated each calf during the exams.

Keepers are monitoring the calves to ensure that they are nursing and developing normally — though they usually have to monitor the calves from a distance since they spend much of their time hiding in their barn or the grass of their pasture. In the wild, oryx calves hide and avoid unfamiliar things to evade predators.

The calves started nibbling on solid foods by the time they were 2 weeks old and will start eating specially formulated pellets with vitamins between 8 and 10 weeks old.

The male calves will be separated from the herd at 6 months old. In the wild, oryx live in herds and each herd is led by one male. The male, or bull, pushes the young males out when they begin showing interest in the females.

Scimitar-horned oryx were extinct in the wild until 2016 when the Environment Agency–Abu Dhabi (EAD) and the government of Chad started releasing oryx born in human care to the wild. Since the reintroductions began, there are now approximately 100 animals living in the wild. SCBI ecologists are collecting behavioral data on the reintroduced oryx from satellite collars. 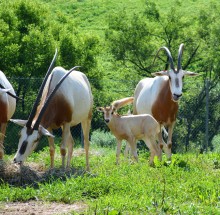 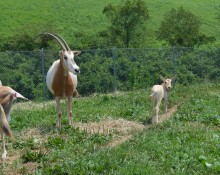 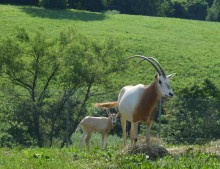 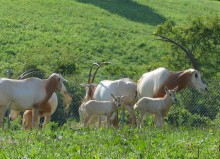