After a five-year hiatus, Cheetah Conservation Station keepers at the Smithsonian’s National Zoo are celebrating the birth of a critically endangered dama gazelle. The male calf was born in an off-exhibit enclosure Aug. 30 to 10-year-old mother Adara and 3-year-old father Edem. Keepers continue to closely monitor the calf, which has been observed nursing regularly, exploring his environment and behaving normally. He is also steadily gaining weight, growing from 12 pounds at 1 day old to 15½ pounds at 5 days old. Animal care staff are allowing Adara and her calf time to bond, so it will be several weeks before visitors can view him at the dama gazelle habitat. This is the fourth calf for Adara but the first for Edem.

Edem arrived at the Zoo in July 2016 from the Smithsonian Conservation Biology Institute (SCBI) following a breeding recommendation from the Association of Zoos and Aquariums’ Species Survival Plan (SSP). The SSP scientists determine which animals to breed by considering their genetic makeup, nutritional and social needs, temperament and overall health. Visitors can see Edem and two other adult female dama gazelles, Zafirah and Fahima, at the Cheetah Conservation Station. The Zoo will provide updates on the calf on Facebook, Instagram and Twitter. 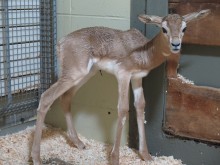 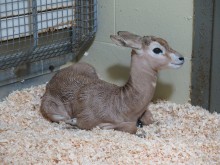