A cow is not a cheetah. Yet against all odds, the fate of this iconic cat will be forever tied to a farm boy from Chandlerville, Illinois, whose would-be career as a livestock husbandry scientist took a wild turn forty years ago. David E. Wildt, renowned scientist and conservationist died at his home on January 15, 2020, surrounded by his family. He was 69. Wildt retired as the Director of the Smithsonian's Conservation Biology Institute’s Center for Species Survival in December 2018. A seminal leader in conservation biology, his prolific breakthroughs in reproductive biology and population genetics benefitted wildlife enormously. Wildt established genome resource banks and developed ground-breaking assisted reproductive technologies for giant pandas to name just one of more than 50 endangered species. His scientific legacy includes more than 300 scientific papers and mentorship and training of hundreds of graduate and post-doctoral students, and colleagues around the world.

Wildt’s early pioneering work on the cheetahs led to the creation of the New Opportunities in Animal Health Sciences (NOAHS Center) in 1988 fostering interdisciplinary collaboration among the National Zoo, the National Institutes of Health, and the National Cancer Institute, with the mission to promote the health, genetic diversity, and reproduction of endangered species in zoo and wild populations.

In 2005, he was one of the founding visionaries to establish the Conservation Centers for Species Survival, now based in Texas. This unique consortium was born out of an urgent need for science-driven programs and greater collaboration between facilities managing critically endangered species and private landowners. To date, these Conservation Centers have helped save some of the world’s rarest animals, from the black-footed ferret to the cheetah, giant panda, Florida panther, Scimitar-horned oryx and others dependent on large tracts of land to thrive.

In 2017, Wildt received the  Smithsonian Institution’s Distinguished Scholar Award in the Sciences.  He also received scientific achievement awards from Illinois State University, the American Association of Zoo Veterinarians, and the Association of Zoos and Aquariums.

In 1994, Wildt married fellow conservationist Susie Ellis, executive director for the International Rhino Foundation. Their vital collaboration continues to impact the conservation of numerous wildlife species.  But, it was the human species that brought Wildt his great joy. He is survived by daughter Chelsea Taft, her husband Beau and grandsons Noah and Jackson, as well as stepsons Zachary Joseph (wife Cassie), and Maxwell Joseph (wife Stephanie), and granddaughter Everett as well as numerous treasured academic offspring. He also is survived by his mother, Louise Wildt, brother Alan Wildt (wife Margaret) of Virginia, IL, and their three children. Wildt and Ellis are canine parents to Ivy La Fleur (IVF), a female from the first litter of dogs birthed in 2015 via in vitro fertilization. Wildt’s SCBI team partnered with researchers at Cornell University to successfully use in vitro fertilization (IVF) to produce live, healthy domestic puppies from cryopreserved (frozen) embryos.

The mechanical darling of Wildt’s eye was his prized 1950 John Deere A tractor, a family heirloom. He realized a lifetime dream of driving it across Michigan’s Mackinac Bridge in 2018. Wildt savored quiet summer afternoons wandering around his beloved Shenandoah Valley acreage, ensuring that the property was pristine. Another passion was orchestrating annual elaborate July 4th firework displays at the annual family gathering on the family farm in Illinois. He was a founding member of “Men at Meatloaf,” a group of six cherished friends who meet religiously at the Strasburg Diner on Tuesday nights for dinner.

Wildt was born and raised in rural Illinois. Cherishing his farm heritage, Wildt grew up on a family livestock and grain farm with many pets and participated in 4-H and Future Farmers of America. Wildt was married to Brenda Baldwin in 1970 through 1985 and remained friends. He received his bachelor’s degree in animal science from Illinois State University in 1972 and his master's degree in animal husbandry from Michigan State University in 1973. Wildt also completed his doctoral studies at Michigan State University, studying physiology and animal husbandry under the supervision of eminent primatologist Dr. Richard Dukelow.

Wildt will be buried in Walnut Ridge Cemetery in Virginia, Illinois, in his family plot. A memorial service and celebration of his life will take place later this Spring in Strasburg, Virginia.  In lieu of flowers, a fund will be established to host thought leaders at SCBI and continue the mentoring that was so important to Wildt.

Wildt is remembered as an insatiable worker, eminent scientist, highly ethical leader, caring mentor, farm-boy at heart, and a loving father and husband.

In recognition and gratitude to all Dave Wildt did for the Smithsonian, we have set up a fund to honor his work. Donations made in Wildt's memory will support his legacy and passion for educating students by bringing renowned science leaders and eminent researchers to SCBI to inspire the next generation of conservation leaders.

Click here to donate through Conservation Nation, part of Friends of the National Zoo. 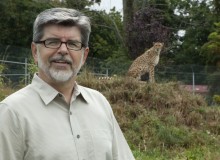