A geriatric black-footed ferret named Capone was humanely euthanized Jan. 19 at the Smithsonian Conservation Biology Institute (SCBI). He was seven years old. Keepers had been closely monitoring Capone for several days, noting that he was lethargic, did not eat all of his food and his abdomen appeared distended. They transported him to the veterinary hospital where an exam revealed significant amounts of fluid in Capone’s chest and abdomen, as well as cysts on his liver and masses in his abdomen. Animal care staff elected to humanely euthanize him based on his poor long-term prognosis.

Capone was born in June 2009 as a result of artificial insemination. His father, Scarface, was the last male to be wild-caught in Meeteetse, Wyo., in 1987. In 2009, Capone was transferred to the U.S. Fish and Wildlife Service (USFWS), where he sired three kits before returning to SCBI. In collaboration with the USFWS, SCBI Center for Species Survival scientist Klaus-Peter Koepfli will use samples of Capone’s tissues to generate the reference genome for the entire black-footed ferret species.

SCBI scientists mitigate threats to the survival of the black-footed ferret by using semen that had been cryopreserved for 10 to 20 years to artificially inseminate live female ferrets. SCBI maintains the only genome resource bank for black-footed ferrets that preserves frozen semen from genetically valuable males, thereby extending their reproductive life. Zoo scientists use this semen for artificial insemination to maintain and enhance genetic diversity by infusing underrepresented genes into the population at strategic times.

Headquartered in Front Royal, Va., SCBI facilitates and promotes veterinary and reproductive research as well as conservation ecology programs based at Front Royal, the Smithsonian’s National Zoo and at field research stations and training sites worldwide. Its scientists are leaders in applying advanced biomedical approaches, including assisted reproductive technologies and germplasm cryopreservation, for enhancing the demographic and genetic diversity of endangered species. 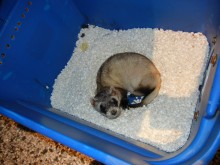