Bird House staff at the Smithsonian’s National Zoo are mourning the loss of Darwin, an elderly male emu who was humanely euthanized Aug. 3. At the time of his death, animal care staff estimated Darwin to be in his mid-to-late-20s, which is the median life expectancy for emus.

Recently, Bird House animal care staff noticed that Darwin was lethargic, did not show an interest in food and was not defecating or urinating. They monitored him closely and offered him his favorite treats, including grapes and greens, to encourage him to eat. Zoo veterinarians performed a diagnostic exam the morning of Aug. 3 and obtained blood samples and X-rays. There was no obvious cause for Darwin’s lethargy or lack of appetite, but supportive treatments were administered. Unfortunately, upon recovery from anesthesia, he was unable to stand. Staff made the decision to humanely euthanize him due to poor prognosis and quality of life. A final pathology report will provide more information in the coming weeks.

Darwin arrived at the Zoo’s Cheetah Conservation Station exhibit in 1997; he was relocated to the Bird House in 2012. His origin is unknown as he came from a private individual in Maryland. Darwin did not sire any offspring. Rather than breed, he served as an educational ambassador for his species, illustrating the nature and behavior of emus to scientists, keepers and Zoo visitors. Keepers fondly remember Darwin as a beloved member of the Zoo family with a larger-than-life personality. He seemed to enjoy greeting staff and visitors alike and would often walk along the front of his exhibit as they passed by him.

Native to the mainland of Australia, emus are listed as “least concern” by the International Union for Conservation of Nature. These large, flightless birds are the second-largest living bird and the largest bird found in Australia. Emus live in eucalyptus forests, woodlands, heath lands, desert shrub lands and sand plains. They received their name from the male’s booming calls, which sound like “e-moo” and can be heard over long distances.

The Zoo’s historic 1928 Bird House is currently closed as it transforms into “Experience Migration,” a first-of-its-kind attraction that immerses visitors in the annual journeys of western hemisphere birds. With almost 100 species of birds, “Experience Migration” and the surrounding bird plateau will be the first zoo exhibition of this size that focuses on the cyclical journeys of migratory songbirds, waterfowl and shorebirds integral to North, Central and South American ecosystems. Through themed walk-through aviaries, interactive experiences and dynamic educational programming, “Experience Migration” will inspire and connect visitors to birds in whole new ways. 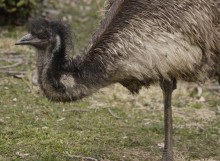