Animal care staff had been monitoring and treating Selkie for pain associated with several masses on her abdomen for months. During a diagnostic exam Nov. 8, veterinarians anesthetized Selkie to collect samples of the masses and to screen her abdomen and chest for disease. She recovered well from the exam, and up until this morning, her behavior was normal. A final pathology report will provide more information.

Selkie arrived at the Zoo in January 1979 from the Naval Oceans Systems Center in San Diego. When she was 6 months old, Navy researchers trained Selkie to perform underwater tasks during the Cold War. Gray seals can dive down to 1,000 feet deep and remain underwater for 20 minutes, so they were considered an efficient and effective means to retrieve items from the ocean floor. In her career as a Navy seal, Selkie learned how to insert and remove equipment, use a screwdriver and turn a large wheel valve.

Most Zoo animals participate in a breeding program called the Species Survival Plan (SSP). The SSP scientists determine which animals to breed by considering their genetic makeup, nutritional and social needs, temperament and overall health. Born in Iceland in November 1973, Selkie’s genes were not represented in U.S. zoos, making her a valuable breeder. Selkie birthed four female pups at the Zoo. Visitors can see two of them—Kara and Kjya—on American Trail, along with Kara’s offspring, a female named Rona. A male gray seal Gunther and two harbor seals named Luke and Squeegee also share the exhibit.

Gray seals are native to the North Atlantic. North American gray seals typically live on the rocky outcroppings of Canada’s east coast, though scientists have spotted them as far south as New Jersey. The International Union for Conservation of Nature lists the gray seal as least concern. Efforts to stop hunting and reduce the number of seals trapped in fishing nets have greatly contributed to the stability of their population. 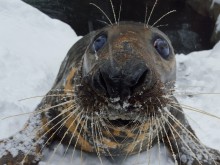