American Trail keepers at the Smithsonian’s National Zoo are mourning the loss of Crystal, a female gray wolf who was humanely euthanized Sunday, April 21. At 14 years old, Crystal was considered geriatric for her species. The median life expectancy for a gray wolf is about eight years in the wild; in human care, they can live as long as 10 to 15 years. A final pathology report will provide more information in the coming weeks.

On Sunday afternoon around 3 p.m., keepers noticed that Crystal was lethargic and appeared to have difficulty breathing. Zoo veterinarians anesthetized Crystal and performed an examination to determine the underlying cause of her symptoms. They found that her body temperature was elevated and administered intravenous fluids, diuretics and a cold-water enema to alleviate her symptoms. Because of her advanced age and the risk that a surgical procedure to help her breathe could predispose her to other medical issues, staff determined it would diminish her quality of life and elected to humanely euthanize Crystal based on her poor long-term prognosis.

Crystal arrived at the Smithsonian’s National Zoo in 2012 from the Calgary Zoo in Canada along with the Zoo’s other female gray wolf, Coby. Although Crystal and Coby were not related, they were hand-raised together as pups and served as companions to one another when they were younger. Most Zoo animals participate in the Association of Zoos and Aquariums’ Species Survival Plan (SSP). The SSP scientists choose which animals to breed by considering their genetic compatibility, personality, health and temperament, among other factors. Rather than breed, Crystal served as an ambassador for her species, teaching Zoo staff and visitors about gray wolf biology, behavior and socialization.

American Trail keepers fondly remember Crystal as playful, goofy and full of energy. When she was younger, she seemed to especially enjoy playing with enrichment items. Toys, puzzle feeders and other enrichment objects stimulate animals’ visual, tactile, olfactory and auditory senses, encouraging them to use their natural behaviors in novel ways and exercise choice and control over how they spend their time. Crystal’s favorite enrichment items were ones that required her natural hunting abilities. She seemed to especially enjoy pulling apart and destroying pillows as depicted in the photo attached. As she entered her golden years, Crystal’s overall activity level decreased, but every so often she would surprise keepers by actively tossing enrichment items around her yard.

Native to the northern United States and Canada, gray wolves are classified as least concern by the International Union for Conservation of Nature. Gray wolves once had one of the largest natural ranges of any terrestrial mammal in the Northern Hemisphere. Human expansion into the Western United States placed wolves and humans in conflict. Hunting and poisoning devastated wolf populations, and they nearly went extinct. The Endangered Species Act of 1973 helped reestablish wolf populations by providing legal protection from the unregulated killing of gray wolves by humans. Today, the gray wolf population has stabilized due to a combination of factors, including legal protections, human migration to more urban areas and land-use changes.

Visitor to the Zoo’s American Trail exhibit can see Coby at the gray wolf habitat. 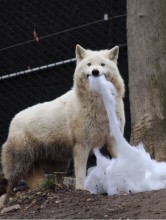