American Trail keepers at the Smithsonian’s National Zoo are mourning the loss of Luke, a male harbor seal who was humanely euthanized Jan. 23. At 35 years old, Luke was considered geriatric for his species. The median life expectancy for male harbor seals is 25 years in the wild and more than 30 years in human care. A final pathology report will provide more information in the coming weeks.

Animal care staff had been monitoring and treating Luke for a chronic infection in his left ear and high ocular pressure. Recently, keepers noticed that he was experiencing an increase in ocular discomfort and having difficulty orientating himself in his habitat pools. Zoo veterinarians and keepers treated Luke’s infection with topical ear antibiotics, oral antibiotics and weekly ear flushes. To reduce his ocular pressure, they administered various eye drops. Despite these treatments, his overall demeanor and behavior continued to decline. In the past week, keepers noted a significant decrease in Luke’s previously hearty appetite, and he stopped showing interest in training with keepers and socializing with his exhibit mates. This behavior was out of the ordinary for Luke, who got along with Rabbit, another harbor seal, and the family of gray seals—Gunther, Kara, Kjya and Birdie—that shared his exhibit. Due to Luke’s poor prognosis and declining quality of life, animal care staff made the decision to humanely euthanize him.

Keepers fondly remember Luke as a laid-back and docile seal who seemed to enjoy exploring his habitat and tackled husbandry and medical training sessions with great enthusiasm, even in his elder years. His passive attitude and willingness to participate in his own care made him an ideal animal for teaching new team members the skills needed for working with pinnipeds.

Luke was born June 17, 1984, at New York Aquarium in Brooklyn, New York. In fall 2011, he arrived at the Smithsonian’s National Zoo following a recommendation by the Association of Zoos and Aquariums’ (AZA) Species Survival Plan for harbor seals. The SSP scientists determine which animals to breed by considering their genetic makeup, nutritional and social needs, temperament and overall health. Although Luke did not breed during his residence in Washington, D.C., he served as a wonderful ambassador for his species, teaching Zoo staff and visitors about the behavior and social nature of harbor seals.

Native to both the North Atlantic and North Pacific oceans, harbor seals have the widest distribution of any seal species. Along the coasts of North America, they can be found in both the North Atlantic and Northern Pacific oceans. On the West Coast of North America, their distribution spans from the Southern Arctic down the California coastline, and on the East Coast, their distribution ranges from South Greenland, to the coastline of the Carolinas. They spend half their time on land resting, breeding and raising their young on both rocky and sandy beaches. Harbor seals are classified as least concern by the International Union for Conservation of Nature.

Zoo visitors can see Rabbit, a 13-year-old male harbor seal, along with a gray seal colony at the American Trail seal habitat. 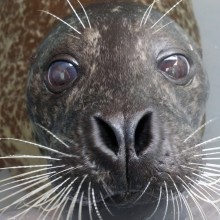