Primate keepers at the Smithsonian’s National Zoo are mourning the loss of Red Oak, a red-fronted lemur who was humanely euthanized Aug. 9. At 24 years old, he was considered elderly for his species; the median life expectancy for lemurs is about 22 years. Early Wednesday morning, keepers found him unresponsive as they were conducting routine wellness checks at Lemur Island. Zoo veterinarians performed a physical exam and took radiographs of Red Oak, which revealed a possible mass in his chest or collapsed lung. During the exam, he went into cardiac arrest. Despite attempts to resuscitate Red Oak, he did not recover, and animal care staff elected to humanely euthanize him. A final pathology report will provide more information in the coming weeks.

Red Oak was born March 14, 1993, at the Duke Lemur Center in North Carolina. In September 2001, he arrived at the Zoo following a recommendation by the Association of Zoos and Aquariums’ Species Survival Plan for red-fronted lemurs. Although Red Oak never sired any offspring, he served as an ambassador for his species, teaching Zoo staff and visitors about the behavior and social nature of lemurs.

“Red Oak had a huge personality for a small primate,” said Becky Malinsky, assistant curator of Primates. “He was always eager to train with his keepers and demanded their full attention. At the same time, he made his presence known to the other two species of lemurs that shared the exhibit with him and his long-time mate, Flare. There was never a question that Red Oak was in charge of the group. His endearing and charismatic personality will be greatly missed by the primate team, many of whom have cared for him during his 16 years at the Zoo.”

Native to the deciduous forests of Madagascar, red-fronted lemurs are considered vulnerable by the International Union for Conservation of Nature due to habitat loss and hunting. The red-fronted lemur is one of seven subspecies of brown lemur. Males range in color from gray to gray-brown, while females have reddish-brown fur. Fewer than 15 red-fronted lemurs remain in North American zoos, including Flare, Red Oak’s 31-year-old female companion. Zoo visitors can see her—as well as two black-and-white ruffed lemurs and four ring-tailed lemurs—at the Lemur Island habitat. 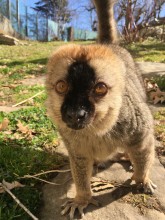 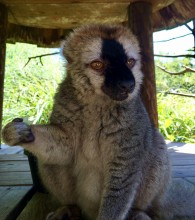