Primate keepers at the Smithsonian’s National Zoo are mourning the loss of Flare, an elderly red-fronted lemur who was humanely euthanized Aug. 6. At 33 years old, she was the oldest red-fronted lemur in North America. The median life expectancy for this species is about 22 years for both males and females. A final pathology report will provide more information in the coming weeks.

“Even through Flare was smaller in stature than all of the other lemurs, she had the biggest personality and was the boss of Lemur Island,” said Becky Malinsky, assistant curator of primates. “In many lemur species, females are dominant over males. Flare had a wonderful leadership quality about her, and the boys would often defer to her during feeding and shifting on-and-off exhibit. When our four ring-tailed lemurs arrived at the Zoo, she acted as an ‘auntie’ to them and showed them the ropes but also kept them in line. The primate team will greatly miss her sweet personality and affinity for training sessions.”

After shifting the lemurs into their indoor enclosure Sunday, Aug. 4, primate keepers noticed that Flare appeared to be experiencing a focal seizure-like episode with temporary loss of awareness and motor skills. Her muscles seemed to tense, she lost her balance and her head was tilting to one side. These behaviors seemed to come on suddenly and intermittently, and keepers became concerned that she would lose her balance while climbing on the perching in her enclosure and inadvertently injure herself. Veterinary staff responded and transported Flare to the Zoo’s veterinary hospital, where they could observe her in the Intensive Care Unit in a space free from climbing structures.

Upon Flare’s arrival, veterinarians administered supportive care, including fluids and anti-inflammatory medications, and monitored her overnight without incident. The morning of Monday, Aug. 5, veterinarians anesthetized Flare and performed a full physical examination with radiographs, an ultrasound and blood work. The exam revealed evidence of early stages of kidney disease and cataracts in both eyes, but did not uncover the underlying reason for the behaviors she was displaying. Veterinarians surmised it was a neurological episode related to a brain condition. Following recovery from anesthesia, Flare returned to Lemur Island and reintegrated with her companions. The morning of Tuesday, Aug. 6, keepers observed Flare once again experiencing transient loss of awareness and motor skills. Due to Flare’s poor prognosis and declining quality of life, animal care staff made the decision to humanely euthanize her.

Flare was born March 19, 1986, at the Duke Lemur Center in North Carolina. While there, she contributed five offspring—and two grand-offspring—to her species’ survival. In September 2001, she arrived at the Smithsonian’s National Zoo following a recommendation by the Association of Zoos and Aquariums’ (AZA) Species Survival Plan for red-fronted lemurs. Although Flare did not breed during her residence in Washington, D.C., she served as a wonderful ambassador for her species, teaching Zoo staff and visitors about the behavior and social nature of lemurs.

Native to the deciduous forests of Madagascar, red-fronted lemurs are considered near-threatened by the International Union for Conservation of Nature due to habitat loss and hunting. The red-fronted lemur—also known as the red-fronted brown lemur—is one of seven subspecies of brown lemur. Males range in color from gray to gray-brown, while females have reddish-brown fur. Only 11 red-fronted lemurs remain in North American zoos accredited by the AZA. Although Flare is the last of her species exhibited at the Zoo, visitors can see two male black-and-white ruffed lemurs—Aloke and Wiley—and four male ring-tailed lemurs—Tom Petty, Bowie, Southside Johnny and Birch—at the Lemur Island habitat. Four red-ruffed lemurs—a female named Molly and males Coronado, Cortez and Jude—reside at the Small Mammal House. 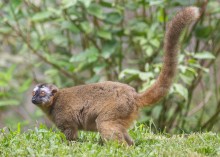 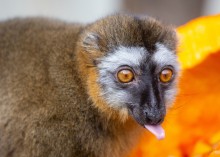