A geriatric female tufted deer died at the Smithsonian Conservation Biology Institute (SCBI) Feb. 2. The 24-year-old tufted deer named Morticia had been treated for cataracts and mobility issues during the past several years but recently had not responded to medications. Her quality of life rapidly declined, and her animal care team made the decision to humanely euthanize her. She was the oldest female tufted deer living in a zoo in North America. The median life expectancy for a female tufted deer is 10 years. She came to SCBI with a male named Gomez in 1994, and gave birth to four fawns while living there.

The tufted deer, a small Asian species of deer, is classified as near threatened by the International Union for Conservation of Nature (IUCN). It is native to China and lives in high, damp forests.

Headquartered in Front Royal, Va., SCBI facilitates and promotes veterinary and reproductive research as well as conservation ecology programs based at Front Royal, the Smithsonian’s National Zoo and at field research stations and training sites worldwide. Its scientists are leaders in applying advanced biomedical approaches, including assisted reproductive technologies and germplasm cryopreservation, for enhancing the demographic and genetic diversity of endangered species.

Caption: Morticia in her barn at the Smithsonian Conservation Biology Institute. 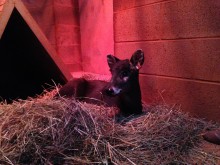