Moonlight, a 4-year-old red panda, gave birth to a cub overnight June 12 at the Smithsonian Conservation Biology Institute in Front Royal, Virginia. Moonlight and the cub appear to be doing well and keepers are cautiously optimistic that the cub will continue to grow. The new mom has been very attentive to the cub, only leaving the nest box where it was born for very short periods of time to eat and drink. Keepers have been monitoring the pair via a closed-circuit camera in the nest box and they have seen Moonlight, an experienced mom, grooming and nursing the cub.

When Moonlight left the nest box June 19, keepers took the opportunity to perform a quick visual exam and weigh the cub. It weighed in at 6 ounces (172 grams), which is normal for a newborn. Keepers and veterinarians will continue to monitor the pair closely during the next several weeks, which are the most critical for a newborn cub.

The cub will stay in the nest box for the next two to three months, where it will eventually open its eyes and begin walking. It is covered in a thick woolly layer of fur that will become thicker and in the coming months turn the iconic rusty red color that gives red pandas their name. The cub will stay with Moonlight until it is 1 year to 18 months old.

Red pandas are native to high-altitude bamboo forests in Asia. Their main threats are habitat loss due to logging and human development. They are classified as “endangered” by the International Union for Conservation of Nature. The number of red pandas living in the wild has declined by as much as 50% during the past 20 years. SCBI participates in the Red Panda Species Survival Plan and breeds and studies red pandas to create an insurance population against extinction. It is home to five red pandas including the new born cub. 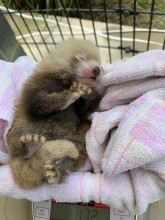 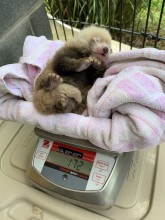