The Smithsonian's National Zoo and Conservation Biology Institute celebrated several births recently. During the past several weeks 31 new residents have been born, many of which were endangered species.

A short-eared elephant shrew was born May 8 at the Zoo's Small Mammal House. The short-eared elephant shrew is the smallest of the 17 living species of elephant shrew, weighing between less than one-third of an ounce and 1.5 ounces at birth. It is too early to determine the baby's sex. Although the tiny shrew has been active since birth, it stayed hidden for the first few days of its life, which is normal. Keepers are now getting more glimpses of the shrew as it comes out of its den to explore. These insect-eating mammals' name comes from their noses' resemblance to the trunk of an elephant.

A fishing cat, recently named Hunter, was born April 15 on Asia Trail. Inhabiting India and Southeast Asia, fishing cat populations are declining and the species is considered endangered because of habitat loss and hunting for food and fur. The first pair of twin fishing cats was born at the National Zoo in May 2012. Only one other facility accredited by the Association of Zoos and Aquariums has successfully bred fishing cats since 2009.

A leaf-tailed gecko hatched June 2. The leaf-tailed gecko is a large, nocturnal gecko from Madagascar threatened with extensive habitat loss from cattle grazing, logging, agriculture and collection for the pet trade.

Three loggerhead shrike chicks hatched in mid-May at the Smithsonian Conservation Biology Institute in Front Royal, Va. Loggerhead shrikes, also called butcher birds, are songbirds that hunt small animals by impaling them on thorns or barbed wire. Loggerhead shrikes were once common, but they have declined rapidly for several decades, and there may be as few as 100 wild loggerhead shrikes left in Virginia. They are listed as threatened or endangered in 20 states and have disappeared from New England. The reason for their decline is not understood, but SCBI scientists are studying the birds.

A red panda gave birth to two surviving cubs May 27 at SCBI. This species is vulnerable because of habitat loss. Red pandas live in the cool temperate bamboo forests in parts of China, Nepal and northern Myanmar. There are fewer than 10,000 adult red pandas left in the wild.

The Smithsonian's National Zoo and Conservation Biology Institute is a leader in science, conservation and sharing knowledge to save wildlife and habitats. The living collection includes more than 1,800 animals from 300 species. Headquartered in Front Royal, Va., SCBI facilitates and promotes veterinary and reproductive research as well as conservation ecology programs based at Front Royal, the National Zoo in Washington, D.C., and at field research stations and training sites worldwide. The National Zoo and Conservation Biology Institute is a part of the Smithsonian Institution, the world's largest museum and research complex. 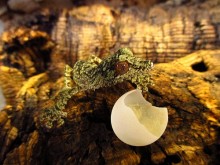