This Brightly Colored Bird Is One of the Most Endangered Bird Species on the Planet
Apr. 26, 2019

A tiny egg nestled in an incubator at the Smithsonian Conservation Biology Institute began wiggling and cracking April 22 until a featherless Guam kingfisher chick emerged. A camera inside the incubator caught the moment the chick hatched out of the egg around 3 p.m. Guam kingfishers are extinct in the wild and only approximately 140 live in human care, making every chick extremely precious.

Guam kingfishers are notoriously difficult to breed. They are territorial, and it has been difficult for the Species Survival Plan to match compatible breeding pairs. Although the chick’s parents successfully bred, they did not properly care for this egg. When keepers saw that the chick’s parents were not incubating the egg, they stepped in to help, placing it in an incubator mimicking the conditions in a nest.

The egg hatched after 22 days, which is normal for the species. Eggs typically hatch between 21 and 23 days after they are laid. During the incubation, keepers candled — or shined a light against the shell of the egg — to track the chick’s development. The chick weighs 8.5 grams but will continue to grow every day. Keepers will feed the chick every two hours between 6 a.m. and 6 p.m. for the next 10 days. At first, it will only receive thawed mice, which are easier for chicks to digest, but eventually its diet will include crickets, mealworms and small anoles (a type of lizard). After 10 days, the feedings will gradually decrease until the chick is fed twice a day like the adults.

Outside of feeding the chick, keepers will keep interactions with it to a minimum to increase the chances of it successfully raising its own chicks as an adult. They have placed mirrors in the incubator and play Guam kingfisher vocalizations to prevent the chick from imprinting on humans.

Guam kingfishers hatch without any feathers, their eyes closed and cannot thermoregulate on their own, so the chick will stay in the incubator until it has grown feathers. Its plumage will start to come in at around 10 days old, but it will take several more months for the chick to develop the vibrant blue, orange and white plumage that adults have.

All existing Guam kingfishers, or sihek (SEE-heck) as they are called in Chamorro (the language of the indigenous people of the Mariana Islands), are descended from 29 individuals. They were taken from the wild into human care in the 1980s to create a breeding program to save the species from extinction. SCBI hatched its first chick in 1985. Since then, 20 chicks have hatched at SCBI as part of the Guam Kingfisher Species Survival Plan. 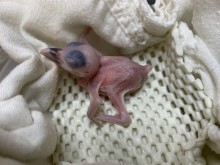 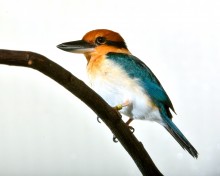