With the recent hatching of two Cuban crocodiles, the National Zoo just got a little snappier! These feisty reptiles hatched July 6 and 14 and are among the most genetically valuable individuals in the Cuban crocodile population under human care. Until now, their mother's genes were not represented in that population. Their mother, Dorothy, is wild-born and is estimated to be 55 years old (while Dorothy is not an official Zoo name, this is a name the Zoo uses for training). She hadn't laid eggs in many years, which made this year's event a very pleasant surprise for the keepers at the Zoo's Reptile Discovery Center.

The Zoo has not successfully hatched Cuban crocodile eggs since 1988. Once Dorothy laid the eggs (26 in total), the keepers pulled them from the nest and incubated the 12 that were fertile. Unlike many other species, temperature during embryonic growth determines the sex of Cuban crocodiles. Because the current population has significantly more females, keepers incubated the eggs at a temperature between 89.6 and 90.5 degrees Fahrenheit to produce males. Just one degree in either direction would have produced a different outcome! As the crocodiles grow, keepers will be able to confirm their sex.

Cuban crocodiles are charismatic, acrobatic reptiles with beautiful coloration. But because of hunting and hybridization with American crocodiles, the species is critically endangered with only an estimated 4,000 left in two small areas in Cuba. The two crocs born at the Zoo are part of the Species Survival Plan's goal of maintaining a population that is genetically viable for the foreseeable future. One or both of the crocodiles will likely be on exhibit for a few months at the Reptile Discovery Center. 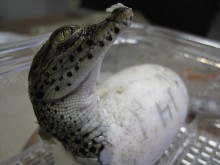