Land Management and Conservancies Key to Coexistence of Wildlife and Livestock
Feb. 12, 2020

Across Laikipia County in central Kenya, large wild herbivores, including endangered species like the reticulated giraffe, Grevy’s zebra and African wild dog, coexist alongside rapidly growing numbers of people and associated livestock. A Biological Conservation study published this month reveals that whether wild herbivore species thrive or decline in Laikipia is linked mainly to the abundance of livestock in the region. The results of this study have actionable implications for translating science into public and private land management to conserve wildlife and ecosystems in Laikipia and beyond.

“For the first time, we used aerial survey data collected by Kenya’s Directorate of Resource Surveys and Remote Sensing over the past two decades and hierarchical multi-species and a multi-year occupancy modeling technique to study how wild herbivore species distribute across Laikipia and to better understand how available water, vegetation and livestock numbers affect those species,” said the study’s lead author Ramiro D. Crego, a post-doctoral fellow at the Smithsonian’s National Zoo and Conservation Biology Institute.

“We found that wildlife-friendly private properties are crucial for conservation in Laikipia, as they provide the necessary space for wild species to thrive, especially in the dry season when vegetation is scarce,” said Dino Martins, co-author on the study and executive director of the Mpala Research Centre in Kenya. “Unlike previous local studies, we found that some pastoralist lands can also support several species of wild herbivores, as long as livestock numbers are well managed. Landscape connectivity is the key—allowing wildlife to move between different areas in different years and environmental conditions. The movement of wildlife across multiple land-use systems is what sustains the rich diversity of wildlife in Laikipia.”

With the help of novel statistical tools, researchers were able to include endangered species in the study. These species have been historically difficult to analyze at the regional scale because they are rare, especially during the last years as populations of many species declined drastically. Researchers found that several species with conservation concerns, such as reticulated giraffes, Grevy’s zebras, Beisa oryx and gerenuk, have occupied less than 50% of Laikipia rangelands for the past 20 years. Increased protection for these species is critical as Laikipia represents one of their last native habitats.

The increasing human population and the associated livestock observed across rangelands in Laikipia County pose large and mounting challenges for the conservation of wildlife. Rangelands cover 88% of Kenya’s land surface and support over 65% of Kenya’s wildlife on private and communal lands. However, state parks and reserves protect only 8.2% of Kenya’s land surface. Wildlife conservation in Kenya is dependent on the success of wildlife conservation on private and communal lands typically shared with people and their livestock, such as those in Laikipia.

Improved understanding of the interplay between wildlife communities, increasing human populations and livestock abundance is critical to guide future conservation action in rangeland ecosystems. Continued and regular long-term monitoring of wildlife and livestock populations in rangelands, as done by Kenya’s Directorate of Resource Surveys and Remote Sensing since 1977, is indispensable to advancing improved understanding of the interactions between livestock and wildlife and assessing the success or failure of conservation interventions and practices.

With demonstrated conservation success on private lands where wildlife, people and livestock coexist, Laikipia County is uniquely positioned to lead the way in how private and communal land can play a critical role in wildlife conservation across global rangelands.

The Smithsonian’s National Zoo and Conservation Biology Institute leads the Smithsonian’s global effort to save species, better understand ecosystems and train future generations of conservationists. As Washington, D.C.’s favorite destination for families, the Zoo connects visitors to amazing animals and the people working to save them. In Front Royal, Virginia, and in more than 30 countries worldwide, Smithsonian Conservation Biology Institute scientists and animal care experts tackle some of today’s most complex conservation challenges by applying and sharing what they learn about animal behavior and reproduction, ecology, genetics, migration and conservation sustainability to save wildlife and habitats. Follow the Zoo on Facebook, Twitter and Instagram.  #WeSaveSpecies #EarthOptimism 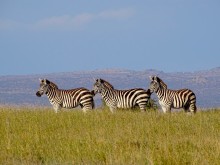 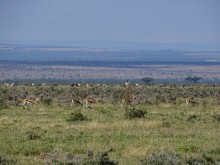 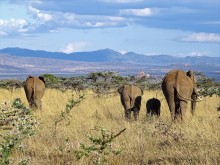 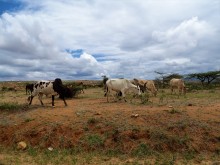