For the first time in the Smithsonian Conservation Biology Institute’s (SCBI) history, ungulate keepers celebrated the birth of a male Hartmann’s mountain zebra at the Front Royal, Virginia, facility. The colt was born overnight July 2 to 6-year-old mother Mackenzie and 5-year-old father Rogan. He is the first offspring for both parents. Ungulate keepers are closely monitoring the colt, and they report that he appears to be nursing well and sticking close by Mackenzie’s side.

Before their arrival at SCBI, Mackenzie and Rogan received a recommendation to breed from the Association of Zoos and Aquariums’ Species Survival Plan (SSP). The SSP scientists determine which animals to breed by considering their genetic makeup, health, personality and temperament, among other factors. In October 2018, Mackenzie and Rogan were transferred to SCBI from the Elmwood Park Zoo in Pennsylvania and the Cleveland Zoo in Ohio, respectively. Females typically reach sexual maturity around 2 to 3 years of age, while males become sexually mature around age 4 or 5. The pair bred naturally in June and July of 2019; Hartmann’s mountain zebra gestation is about one year.

Each zebra is a unique individual, and keepers are looking forward to seeing how the colt’s personality develops. While mother Mackenzie is feisty and a bit standoffish, father Rogan is quirky and easygoing. The colt lives with Mackenzie and an unrelated female, 7-year-old Xolani, in a herd. Since male zebras do not provide any parental care to their offspring, Rogan lives in a separate enclosure nearby. Although the colt sticks close by Mackenzie’s side now, keepers say they are excited to see the foal explore his surrounding and watch his curiosity grow. Over the next two months, the colt will start sampling grass and pellets.

As a public health precaution due to COVID-19, the Smithsonian’s National Zoo and Conservation Biology Institute is temporarily closed to the public. Animal keepers and veterinary staff remain working on site at the Zoo and SCBI to provide the usual highest quality care for the animals. Additional information on the Zoo’s COVID-19 response is posted to the Zoo’s website. The Zoo will share updates on the colt on Facebook, Instagram and Twitter.

Hartmann’s mountain zebras are a subspecies of the mountain zebra, which is one of three zebra species. Considered vulnerable by the International Union for Conservation of Nature, Hartmann’s mountain zebras live in dry mountain habitats of Namibia. Unlike other zebra species, Hartmann's mountain zebras live in small herds, have vertical stripes on their neck and torso and horizontal stripes on their backside, and have a small fold of skin under their chin (called a dewlap). With less than 25,000 individuals left in the wild, the biggest threat to this species’ survival is habitat loss and fragmentation as the result of livestock production and agriculture.

The Smithsonian’s National Zoo’s legacy of conservation work extends beyond the public Zoo in Washington, D.C., to SCBI in Front Royal, Virginia. Scientists at SCBI study and breed more than 20 species, including some that were once extinct in the wild, such as black-footed ferrets and scimitar-horned oryx. Animals thrive in specialized barns and building complexes spread over more than 3,200 acres. The sprawling environment allows for unique studies that contribute to the survival of threatened, difficult-to-breed species with distinct needs, especially those requiring large areas, natural group sizes and minimal public disturbance. 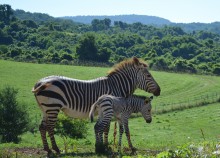 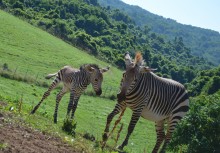