Hoofstock keepers at the Smithsonian Conservation Biology Institute (SCBI) are mourning the loss of Raylan, a 4-year-old male Hartmann’s mountain zebra who was humanely euthanized Jan. 30. The median life expectancy for a male of this species is about 12 years.

On Tuesday morning, animal care staff noticed that Raylan’s abdomen was distended, and he was showing symptoms of abdominal discomfort. SCBI veterinarians treated him with analgesics but his condition did not improve. They consulted with veterinary equine surgeon Courtney Bolam and veterinary equine anesthesiologist Stephanie Wilkinson of the Piedmont Equine Practice, who performed an emergency exploratory laparotomy. They discovered an entrapment of the small intestine and that a significant portion of the bowel had died due to loss of blood supply. Animal care staff made the decision to humanely euthanize Raylan due to poor prognosis and quality of life. A final pathology report will provide more information in the coming weeks. 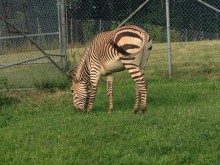