Cheetah Conservation Station keepers at Smithsonian’s National Zoo and Conservation Biology Institute are rejoicing in the birth of two lesser kudu calves. The first calf, a male, was born Feb. 21 to 4-year-old Gal, a first-time mother. Keepers named the calf Zahi, which means “splendid” in Somali. The second calf, a female, was born March 6, and is 8-year-old Rogue's fourth calf. Her name is Jamilah, which means “beautiful” in Somali. Jamilah is the first female lesser kudu calf born at the Zoo. Zoo veterinarians conducted a brief exam of both newborns the day after their births and found each to be healthy and strong. The Zoo’s 12-year-old male, Garrett, is the father of both calves.

Gal and Rogue have been very attentive toward each other’s calf and share cleaning and feeding duties. Keepers often witness Rogue nursing both calves at the same time, while Gal more often nurses one at a time. Rogue and Garrett’s youngest son, 1-year-old Machi, was also present for both births and has already proven to be a good and patient older brother. Garrett can see, hear and smell the calves through a mesh “howdy” window behind the scenes, but will not share a habitat with them anytime soon.

Weather permitting, the calves, mothers and Machi are visible in their outdoor exhibit every morning. Garrett and occasionally Machi share the habitat for the remainder of the day. Native to arid and semi-arid areas of northeastern Africa, including parts of Ethiopia, Somalia, Kenya, Sudan, Uganda and Tanzania, lesser kudu are listed as near threatened by the International Union for Conservation of Nature. Lesser kudu number about 100,000 in the wild, but the population is decreasing due to habitat loss from human and livestock expansion, hunting and disease.

For the second time in 6 months, Small Mammal House keepers are celebrating the birth of a golden-headed lion tamarin. When they reported for duty the morning of March 10, they observed that 4-year-old mother Lola had given birth overnight and was caring for two infants. Staff observed both nurse and vocalize; they appeared healthy and strong. The morning of March 17, one of the twins was found apart from its mother and sibling. Animal care staff administered supportive care. Despite their efforts, the infant did not respond to treatment and died.

The surviving offspring—the third for both Lola and 8-year-old male, Coco—is thriving and curious about its surroundings. Its older siblings, who were born Oct. 7, have shown a lot of interest in the newborn, and keepers have observed them occasionally carrying the newest family member. Animal care staff are closely monitoring the family but leave Lola and Coco to bond with their offspring without interference. In the next few weeks, the 6-month-old twins will have their first vet exam; at that time, keepers will learn the pair’s sexes. Native to the southern part of the state of Bahia, Brazil, golden-headed lion tamarins are considered endangered due to habitat loss and fragmentation in their native range. Zoo visitors can view the golden-headed lion tamarin family at the Small Mammal House. 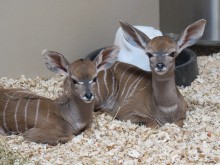 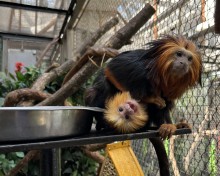