Staff at the Smithsonian’s National Zoo and Conservation Biology Institute are grieving the loss of Nababiep, a female African lion affectionately called Naba, who was humanely euthanized Sept. 26. She was 18 years old. The median life expectancy for African lions in human care is 17 years.

In March, Great Cats keepers noticed that Naba was chewing in an exaggerated manner and not consuming all of her diet. Naba was trained to voluntarily participate in awake health exams and blood draws. When keepers gave Naba the cue to open her mouth, they observed some dental issues, and blood tests showed chronic renal disease, both of which can be common in older lions. Zoo veterinarians prescribed pain medications to ease Naba’s discomfort, and keepers presented her diet in a variety of ways to encourage her to eat. Zoo veterinarians and an outside veterinary dental specialist treated Naba’s dental disease over the next few months, but despite intermittent improvements in her behavior and appetite, she continued to decline.

During a complete veterinary exam last Friday to identify the cause of her ongoing decline, a new dental concern was addressed, and Naba’s team of keepers and veterinarians were cautiously optimistic she could recover. However, she did not eat well, was not defecating throughout the weekend and her discomfort was noticeable to the team. Concluding that further attempts to investigate Naba’s illness would be invasive and difficult on her, the team made the hard decision to euthanize Naba. Initial necropsy findings showed a large mass in her small intestine and a cystic lesion in her brain. A final pathology report will provide more information in the coming weeks.

Born at a private reserve in South Africa in 2004, Naba arrived at the Zoo in October 2006 following a breeding recommendation from the Association of Zoos and Aquariums’ Species Survival Plan (SSP). Sister Shera and a male, Luke, accompanied her. The SSP scientists determine which animals to breed by considering their genetic makeup, nutritional and social needs, temperament and overall health.

Along with Shera, Naba was one of the most genetically valuable lions in the North American population because her genes were not represented in U.S. zoos at that time. Together with her mate, Luke, she gave birth to two litters. Her five cubs—born in 2010 and 2014—were transferred to North American zoos for breeding, research and to act as ambassadors for their species. Zoo visitors can see Luke, or Shera and her female offspring Amahle, or Shera’s male offspring Shaka and Jumbe on exhibit or on the Zoo’s Lion Cam.

During the past decade, lion populations have declined by about 30%. Currently, an estimated 20,000 lions remain in the wild. The International Union for Conservation of Nature now classifies African lions as vulnerable. 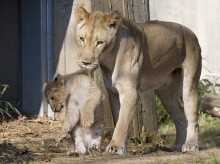