A 23-year-old male Andean bear named Cisco died at the Smithsonian’s National Zoo Oct. 24 during an emergency veterinary exam. In the past week, Cisco became less active and began breathing more heavily with an occasional cough. Those signs worsened over the weekend and his appetite declined, which prompted keepers and veterinarians to move an exam scheduled for later this week to Monday morning.

During the exam, veterinarians immediately noticed that Cisco was having difficulty breathing. A chest ultrasound revealed large amounts of liquid in his lungs and abnormal soft-tissue masses within his chest cavity. The team performed an emergency thoracentesis to remove the fluid from his chest to help improve his breathing. It was at that point that Cisco developed cardiopulmonary arrest. Due to his grave prognosis, the team made the decision not to resuscitate Cisco, and let him humanely pass pain-free and quietly. Male Andean bears in human care, on average, live into their early 20s. A final pathology report will provide more details in the coming weeks.

“Cisco was important to the Andean bear population living in zoos,” said Craig Saffoe, curator of Andean bears at the Smithsonian’s National Zoo. “Having come to the National Zoo at 20 years old, he proved that older male Andean bears are quite capable of producing offspring.  He helped us learn more about Andean bears, and we are sharing everything we have learned about their husbandry, breeding, nutrition and veterinary care from him and our other bears with colleagues in other zoos and in Peru to help the species.”

Born in 1993 at the Calgary Zoo, Cisco came to the National Zoo on loan from the Queens Zoo in New York in September 2013. During his time at the National Zoo, he sired two male cubs born in November 2014. Those cubs, Mayni and Muniri, now live at Nashville Zoo.

Andean bears, also known as spectacled bears, are South America’s only bear species.  As their name suggests, they live in the Andes and outlying mountain ranges. Andean bears are listed as vulnerable on the International Union for Conservation of Nature’s Red List of Threatened Species, and it is estimated that there are only 2,000 left in the wild.

The Zoo’s adult female bear, Billie Jean, can be seen at the Andean bear exhibit. 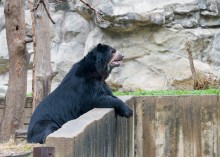