Cheetah Conservation Station keepers at the Smithsonian’s National Zoo are mourning the loss of Justin (nicknamed “Gat”), a male cheetah who died unexpectedly following a brief illness. Gat was 8 years old; the median life expectancy for male cheetahs in the wild is between six and eight years.

On Feb. 22, animal keepers noticed that Gat had a cough. They closely monitored him and observed that it had worsened overnight. Zoo veterinarians performed a complete exam on Gat Feb. 23 that included bloodwork, thoracic and abdominal radiographs, abdominal ultrasound, bronchoscopy and a transtracheal wash. It revealed that Gat had bacterial bronchitis and pneumonia. At the time of the exam, veterinarians also obtained samples and performed a COVID-19 test, which came back negative. Gat remained at the Vet Hospital for several days for treatment with antibiotics and anti-inflammatory drugs and appeared to be making a recovery. However, upon returning to the Cheetah Conservation Station March 3, Gat stepped into an enclosure behind the scenes and suddenly collapsed. Animal care staff attempted to resuscitate Gat; unfortunately, they were unable to revive him. A preliminary necropsy found evidence of hemorrhagic pneumonia.

Gat was born April 23, 2012, at the Smithsonian Conservation Biology Institute in Front Royal, Virginia. His mother, Ally, experienced complications during delivery and abandoned him and his sister, Carmelita. They were transferred to the Zoo and hand-raised by Cheetah Conservation Station keepers, who provided round-the-clock care to the cubs. In partnership with USA Track & Field, the Zoo named the cubs after the fastest American male and fastest American female athletes in the 2012 Olympics 100-meter dash, Justin Gatlin and Carmelita Jeter. Upon meeting the cub, Gatlin gave cheetah Justin the nickname “Gat the cat,” and the new moniker was adopted among the animal care team.

Cheetah Conservation Station keepers fondly remember Gat as a cheetah who seemed to prefer the company of people over that of other cheetahs. He would regularly solicit attention from keepers and eagerly participated in opportunities to interact with them, including husbandry training sessions. Gat could often be heard purring loudly and enjoyed playing with enrichment toys for hours. He frequently chased his favorite red rubber ball and carried large Kong toys around his habitat.

Most Zoo animals participate in the Association of Zoos and Aquariums’ Species Survival Plan (SSP). The SSP scientists choose which animals to breed by considering their genetic compatibility, personality, health and temperament, among other factors. Rather than breed, Gat served as an ambassador for his species, teaching Zoo staff and visitors about cheetah biology, behavior, socialization and the important role they play as top predators in the ecosystem.

Cheetahs live in small, isolated populations mostly in sub-Saharan Africa. Many of their strongholds are in eastern and southern African parks. Due to human conflict, poaching and habitat and prey-base loss, there are only an estimated 7,500 to 10,000 cheetahs left in the wild. The International Union for Conservation of Nature considers cheetahs vulnerable to extinction.

As a public health precaution due to COVID-19, the Smithsonian’s National Zoo and Conservation Biology Institute is temporarily closed to the public. During the closure, the Zoo is sharing animal updates from behind the scenes using the hashtag #NatZooZen on Facebook, Instagram and Twitter. 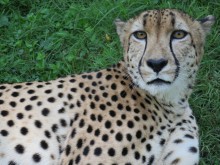