Per standard procedure, Niko is now in quarantine for approximately 30 days and is being cared for by keepers, nutritionists and veterinarians in an off-exhibit area. To keep Niko mentally and physically stimulated, keepers are providing him with a variety of enrichment, including tree trunks, branches, bobbin toys and puzzle feeders. When Niko makes his public debut in early November, virtual visitors will also be able to see the sloth bears up-close thanks to a new high-definition cam facing an outdoor cave. The sloth bear cave and webcam was made possible by donations to the Zoo’s 2015 Sloth Bear Appeal. In the meantime, Remi has access to both her indoor and outdoor habitats and Zoo visitors may be able to see Remi and chat with keepers during the daily 1:30 p.m. animal demonstration.

Niko’s arrival will add a boost to the Association of Zoos and Aquariums’ Species Survival Plan (SSP). The SSP scientists determine which animals to breed by considering their genetic makeup, nutritional and social needs, temperament and overall health. Currently, only 28 bears exist in the North American Population; all of them participate in the SSP. Because both Niko and Remi are quite young, it will likely be a few years before the bears breed and produce cubs. At this stage, keepers hope that the pair will be receptive to cohabitating and will spend time together as companions. Since Niko’s arrival, he and Remi have been able to see, smell and hear one another, and they appear to be very curious about and interested in one another. Once the quarantine period has lifted, keepers will begin formal introductions with and without mesh barriers between the bears.

Sloth bears are not related to sloths but were given that moniker by English settlers who named them due to their dark, shaggy coat and long claws. The bears have a long snout, flexible lips, nostrils that can close and large lung capacity; these traits allow them to suck up ants, termites and other insects. Native to India, Sri Lanka and Nepal, sloth bears are considered vulnerable to extinction by the International Union for Conservation of Nature. Fewer than 20,000 remain in these countries due to habitat destruction and increased agricultural activity. 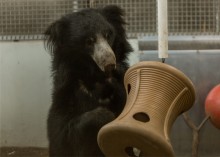