The Smithsonian's National Zoo is inviting its Facebook fans to name one of Asia Trails' most adventurous and charismatic critters: a sloth bear cub. Starting Wednesday, May 1, the Zoo is hosting a poll on its Facebook page; fans can vote for their favorite among three names that keepers selected to best reflect the cub's traits, personality and characteristics.

The name choices are:

Voting will close at noon Friday, May 3. The Zoo will announce the winning name on Facebook shortly thereafter.

The cub has spent the past 4 months bonding with Hana in a den near the Asia Trail exhibit. Animal care staff and the public have had the opportunity to watch Hana nurture the cub and watch him play and grow via the live Sloth Bear Cub Cam on the Zoo's website. The information gathered from watching their behavior will be shared with the Association of Zoos and Aquariums for the benefit of other institutions that exhibit and want to breed this species.

Sloth bear cubs stay with their mother for two or three years. Female bears are known to carry their young on their backs with the cubs holding on to the mother's long shaggy fur. The family's public debut will take place later this summer.

The International Union for Conservation of Nature lists sloth bears as vulnerable because populations in their native Bhutan, India, Nepal and Sri Lanka are decreasing due to loss of habitat and poaching. 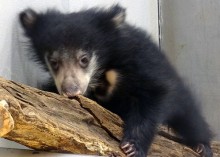