Tropical tree-dwelling mammals such as monkeys, kinkajous and opossums depend on complex treetop highways to get to food, potential mates and avoid predators on the ground. In the largest-ever canopy-based camera-trapping study, Smithsonian Conservation Biology Institute (SCBI) scientists and partners found that when a pipeline clearing in Peru severed those highways, arboreal species were willing to get around using natural bridges, or connecting branches, intentionally left above the project. This study is already resulting in direct conservation benefits for Peru’s wildlife.

“The results of this study far exceeded our expectations,” said Tremaine Gregory, SCBI research scientist and lead author on the paper, which was published June 20 in Scientific Reports. “Over the course of a year, we have camera-trap photos of animals crossing on the ground only 16 times, versus photos of animals crossing the natural bridges astonishingly more than 3,000 times. It’s encouraging that if an infrastructure project like this has to move forward, natural bridges are resoundingly effective in ensuring that animals can still get to the resources they need.”

The study, which SCBI led in collaboration with Farah Carrasco, a graduate student at the University of Florida, yielded more than 1 million camera-trap photos. It is the first study to comprehensively monitor arboreal mammal use of natural canopy bridges. The rate of mammal crossings in the bridges was more than 100 times higher than on the ground. The photos revealed that 25 arboreal mammal species used the natural bridges, while only six of those species crossed on the ground.

“One of SCBI’s greatest strengths is the ability to form collaborations necessary to carry out original scientific research to identify and solve pressing conservation challenges,” said Jessica Deichmann, an SCBI research scientist and co-author on the paper. “Here we partnered with industry to identify a problem, implemented a proposed solution and used an innovative camera trapping technique to test the solution. The results plainly and powerfully show the effectiveness of a simple way to reduce impacts of human activity on biodiversity—a conservation biologist’s dream.”

According to the paper, the animals primarily used the natural bridges at night. The species that used the natural bridges most included a member of the world’s only nocturnal monkey genus, called the night monkey; other species include the kinkajou; the olingo, which is a cousin of the recently discovered olinguito; and opossums. The authors were also surprised to discover that one of the species using the natural bridges frequently—a dwarf porcupine species—was 900 kilometers outside of its known geographic range.

The researchers hope to next look at what kind of artificial substrate could make effective artificial bridges, which offer backup if natural bridges are knocked down by storms. More immediately, the scientists are recommending, first in Peru, and then the rest of the world, that all roads and pipelines where strictly arboreal mammal populations occur include canopy bridges.

“The hard work put into this study should now result in direct conservation benefits for Peru’s wildlife,” said Alfonso Alonso, managing director of SCBI’s international field programs and co-author on the study. “The results of this research are in the process of being incorporated into Peruvian legislation, and companies engaged in infrastructure development projects will be required to leave natural canopy bridges to minimize forest fragmentation.” 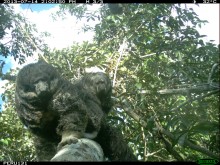 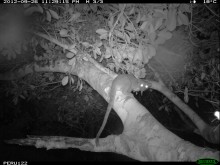 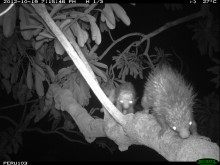 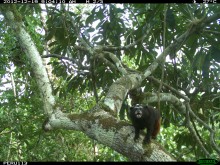 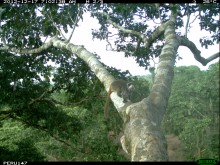 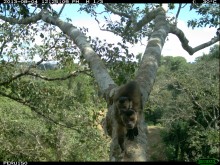 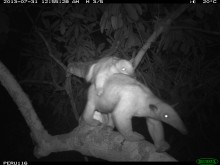 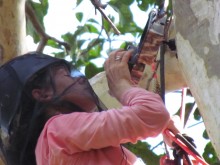 Biodiversity in the Peruvian Amazon
Through camera trap studies, community conservation programs and collaboration, Smithsonian scientists are working to minimize the impact that natural gas development has on tropical forests and wildlife.
Conserving Amazonian Tropical Ecosystems
In the Peruvian Amazon of Madre de Dios, natural ecosystems provide essential services to local communities. Smithsonian scientists are partnering with stakeholders to  evaluate the region's biodiversity and devise scenarios for future sustainable development.