The Small Mammal House at the Smithsonian’s National Zoo has a new resident worth slowing down for. Visitors can now see Athena, a 1½-year-old female two-toed sloth in her new home that she shares with golden lion tamarins, an aracari and a male two-toed sloth. She made her debut Dec. 22.

Athena moved to the Zoo from the Ellen Trout Zoo in Texas as the result of a breeding recommendation. She is recommended to breed with Vlad, a 34-year-old two-toed sloth also living in the Small Mammal House. Keepers have started introductions between the two slowly. They first swapped the blankets the sloths curl up with, giving them the opportunity to get acquainted with each other’s scents before introducing them face-to-face. Keepers will soon allow the sloths to meet between mesh, where they will see each other without physically being in the same space. If Athena and Vlad seem interested in each other and indicate that they would like to spend time together, they will be on exhibit together.

Athena and Vlad will spend the next year-and-a-half getting to know each other. Female two-toed sloths reach full maturity and are capable of breeding when they are 3 years old. If the introductions go well, two-toed sloth pregnancies last for about six months. Babies spend their first five weeks clinging to their mothers’ bellies and will stay with their moms even after they are capable of moving around on their own and have been weaned. The last baby sloth born at the Zoo was in 1984.

Vlad is not the only new exhibit-mate that Athena will be getting to know during the next several weeks. The golden lion tamarins she will share a home with are very fond of sloths and will often curl up and nap with Vlad. Athena has lived with monkeys in the past, and keepers are hopeful that she will continue the tradition of sloths and tamarins hanging out together at the Zoo. Athena will also have one non-mammal exhibit mate, a green aracari (tropical bird).

In the meantime, while Athena gets to know her exhibit mates, keepers will be working with her on training. They will start training with her to participate in her own care, including for ultrasounds.

Two-toed sloths are native to Central and South America. They are arboreal and live in the canopies of tropical rainforests. As their name suggests, two-toed sloths are very slow moving and have a metabolic rate of about 40% to 45% of what would be expected for their body weight. Their body temperatures range between 86 to 93 degrees Fahrenheit, which helps them conserve energy. The fruit and leaves that primarily make up their diet may stay in their digestive tracts for up to one week. Their slow digestion also means they only need to descend from their tree-top homes to defecate once each week. Despite being arboreal, two-toed sloths are very competent swimmers. Their populations are stable in the wild, and they are listed as a species of “least concern” by the International Union for Conservation of Nature. 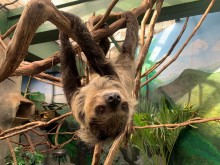 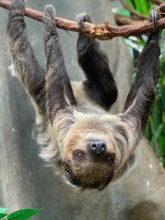 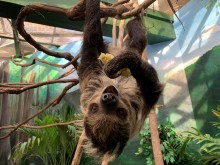