The third female brown kiwi that hatched at the Smithsonian's National Zoo Dec. 11 has a new moniker: Omana (pronounced oh-MAH-nah). Mike Moore, New Zealand Ambassador to the United States, named the kiwi in honor of his hometown, O-Manawatere, a township located southeast of Auckland. Omana's December 11 hatching is important to kiwi conservation--currently, there are only 15 female and 33 male kiwi in zoos outside New Zealand.

Only five zoos outside of New Zealand have successfully bred these unique birds, and the National Zoo has cared for six chicks--three males and three females--since Toru hatched in 1975. Like her wild-caught father Maori, Omana will become a valuable breeder because her genes are not well-represented in the captive population. She will not be on exhibit at the Zoo. However, in a few weeks, visitors to the Zoo's website will be able to watch Omana forage in her new enclosure via the Kiwi Cam. The Zoo's Smithsonian Conservation Biology Institute in Front Royal, Virginia, also has a breeding pair of kiwi.

The International Union for Conservation of Nature considers brown kiwi an endangered species due, in part, to predation by dogs, cats, and stoats (members of the weasel family). The remaining wild population of the brown kiwi is estimated at roughly 24,000, down from 60,000 in the 1980s. In an effort to reduce chick deaths, New Zealand developed Operation Nest Egg and other programs that remove eggs and chicks from the wild, rear them in captivity and release them back to the forests once they weigh one kilogram--the weight at which they can defend themselves from most predators. The kiwi population is stabilizing in areas where conservation efforts occur.

The National Zoo boasts the nation's only Meet a Kiwi program, where visitors can observe these unique birds up close and learn about the Zoo's partnership with conservation organizations, including Operation Nest Egg. Meet a Kiwi takes place in the Bird House every Monday, Wednesday, and Friday at 11 a.m. 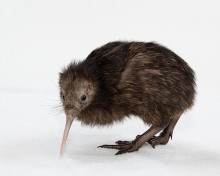