Skip to main content
X
× The Zoo is reopening May 21! All visitors will require free entry passes and be required to follow safety measures. Free timed-entry Asia Trail/Panda Passes are required for the giant panda viewing.
Share this page:

The Smithsonian’s National Zoo and Conservation Biology Institute is asking the public to help name the male giant panda cub, now 9.2 pounds of adorable, at the David M. Rubenstein Family Giant Panda Habitat. The Aug. 21 birth was streamed live on the Zoo’s Giant Panda Cam, and since then more than 1 million virtual visitors have tuned in to watch him grow. Voters can select their favorite name from Nov. 16 to Nov. 20 on the Zoo’s website (maximum one vote per day). The name that receives the most votes will be bestowed on the cub. The Zoo will announce the winning name Nov. 23. Click here for additional giant panda cub media resources.

Giant pandas are an international symbol of endangered wildlife and hope, and the birth of this cub offered the world a much-needed moment of joy amidst the COVID-19 pandemic. The possible names—chosen by the Zoo and Chinese partners—reflect the extraordinary circumstances under which this cub was born and celebrate the collaboration between colleagues who strive to conserve this species. The possible cub names are:

The Zoo will continue to provide updates on the cub on its website, on social media using the hashtags #PandaStory and #PandaCubdates and in the Giant Panda e-newsletter. Giant panda fans can see the cub, mother Mei Xiang (may-SHONG) and father Tian Tian (tee-YEN tee-YEN) via the Giant Panda Cam on the Zoo’s website. It is one of five live animal webcams hosted on the Zoo’s website.

At 22 years old, mother Mei Xiang is the oldest giant panda in the United States to give birth. Smithsonian Conservation Biology Institute reproductive scientists and Zoo veterinarians performed an artificial insemination on Mei Xiang March 22 with frozen semen collected from Tian Tian, who turned 23 years old Aug. 27. This is the first time a zoo in the United States has experienced a successful pregnancy and birth via artificial insemination using only frozen semen. Zoo veterinarians confirmed evidence of a fetus on an ultrasound Aug. 14 and Aug. 17.

As a public health precaution due to COVID-19, the Smithsonian’s National Zoo and Conservation Biology Institute has updated its hours and entry requirements. The panda house at the David M. Rubenstein Family Giant Panda Habitat is currently closed to provide quiet for Mei Xiang and her cub. Asia Trail—including giant panda viewing—is temporarily closed to visitors for the scheduled repaving of walkways.

In addition to this cub, Mei Xiang has given birth to three surviving offspring: Tai Shan (tie-SHON), Bao Bao (BOW BOW) and Bei Bei (BAY BAY). Tai Shan was born July 9, 2005, and moved to China February 2010. Bao Bao was born Aug. 23, 2013, and moved to China in February 2017. Bei Bei was born Aug. 22, 2015, and moved to China in November 2019. As part of the Zoo’s cooperative breeding agreement with the China Wildlife Conservation Association, all cubs born at the Zoo move to China when they are 4 years old. The Zoo’s current cooperative breeding agreement expires in December 2020. 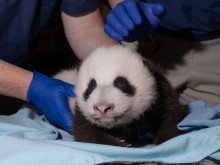