The Smithsonian’s National Zoo and Conservation Biology Institute invites the public to help name three black-footed ferret kits—one female and two males—born May 19 at the Smithsonian Conservation Biology Institute (SCBI) in Front Royal, Virginia. The births were streamed live on the Zoo’s Black-Footed Ferret Webcam, and virtual viewers have been watching the kits grow ever since. SCBI carnivore keepers selected nine potential names that reflect black-footed ferrets’ significance as a distinctly North American species. The public will have the opportunity to vote for three names starting Tuesday, July 20, at 10 a.m. through Sunday, July 25, across three platforms.

There are three possible name choices for each kit. Voting to name the female kit will be hosted on the Zoo’s website, one male kit will be named by current Smithsonian’s National Zoo members via an e-newsletter poll and the other male will be named by players of the Zoo’s educational mobile game, Zoo Guardians. Zoo Guardians is free to download on Apple and Android devices; players can find the poll to vote in their game’s mailbox. The winning names will be announced July 27.

The name choices for the female kit are:

The name choices for the male kit named by Smithsonian’s National Zoo members are:

The name for the male kit named by Zoo Guardians players are:

“This September marks the 40th anniversary of the discovery of a small population of black-footed ferrets, whom we thought were extinct at that time,” said Will Pitt, deputy director of SCBI and acting deputy director of the Smithsonian’s National Zoo. “This species has made a remarkable recovery thanks to the power of collaborative conservation science and animal husbandry. I am thrilled we can honor this milestone and success by inviting our fans to help name Potpie’s kits.”

The kits were born to third-time mother, 3-year-old Potpie and sired by 1-year-old father, Daly. The Black-Footed Ferret Webcam is one of five live animal webcams hosted on the Zoo’s website. Staff have been closely monitoring Potpie and her kits via the webcam and conduct weekly weight checks on the kits to ensure they are healthy and making good gains. As the black-footed ferret kits grow, they will spend more time outside the den. A second webcam launched July 8, showing their main enclosure. The public can follow the Zoo’s Facebook, Instagram and Twitter to stay up to date on the kits’ milestones.

Around 4 months old, the kits will separate from their mother. In August, the Black-Footed Ferret Species Survival Plan will conduct a genetic assessment of the entire population managed in human care. This assessment will determine whether the kits remain at SCBI, are transferred to another breeding facility or join the United States Fish and Wildlife Service (USFWS) preconditioning program in preparation for their release into the wild. The preconditioning program allows ferrets to learn to live in burrows and demonstrate that they can successfully catch prey before being reintroduced to the wild.

Black-footed ferrets once ranged across the western plains but were thought to be extinct until a small colony was discovered Sept. 26, 1981, near Meeteetse, Wyoming. Eighteen black-footed ferrets were brought into human care by the USFWS and the Wyoming Game and Fish Department to prevent the species from going extinct.

In 1988, SCBI was the first to receive offspring from those 18 and breed black-footed ferrets outside of Wyoming. Since their arrival in 1988, more than 1,000 black-footed ferrets have been born at SCBI, including 140 born via artificial insemination. More than 350 kits born at SCBI have gone into preconditioning programs for the chance to be released to the wild. SCBI scientists have helped increase the genetic diversity in the black-footed ferret population using artificial insemination and cryopreserving sperm. Cryopreserved and thawed sperm can inject a much-needed genetic boost into the population.

The legacy of conservation work at the Smithsonian’s National Zoo extends beyond the public Zoo in Washington, D.C., to SCBI in Front Royal, Virginia. Scientists at SCBI study and breed more than 20 species, including some that were once extinct in the wild, such as black-footed ferrets and scimitar-horned oryx. Animals thrive in specialized barns and building complexes spread over more than 3,200 acres. The sprawling environment allows for unique studies that contribute to the survival of threatened, difficult-to-breed species with distinct needs, especially those requiring large areas, natural group sizes and minimal public disturbance. 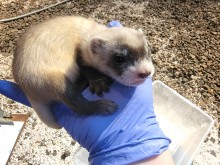