Researchers have learned that despite strong global support for tiger conservation, the survival of the species continues to be threatened. Habitat loss, poaching and isolation are all factors leading to population decline, but a team of scientists, including Robert Fleischer and Jesus Maldonado from the Smithsonian Conservation Biology Institute and Bibek Yumnam and Yadvendradev Jhala of the Wildlife Institute of India, is working towards understanding limitations and enhancing the current conservation system.

Currently there are only about 3,000 tigers remaining in the wild in 13 Asian countries, occupying just 7 percent of their historic range. About 60 percent of these tigers occur in India, in a series of widely separated populations. India has implemented conservation legislation and established 47 tiger reserves, many of which accommodate breeding populations. However, scientists found that independent, protected areas are too small to fuel population growth. They were able to identify individual tigers and their movement patterns through non-invasive genetic analysis of tiger scat. A quantitative assessment of tiger habitats along with detailed modeling and analyses enabled scientists to fashion a plan that could safely and cost-effectively connect isolated tiger populations.

Our genetic analysis identified 169 individual tigers in the Central Indian region under study, including 17 that had dispersed from one reserve to another, said Fleischer, head of SCBI's Center for Conservation and Evolutionary Genetics.Significantly, we found that tiger dispersal is directly related to the resistance or cost of moving between populations, a measure based largely on habitat characteristics and the density of human populations.

By mapping these tigers' movements, the team identified several functional corridors through central India's rugged landscape that were created through contemporary migration. The work, published in the PLoS-ONE paper Prioritizing Tiger Conservation through Landscape Genetics and Habitat Linkages, proposes that long-term survival is possible only if the separate reserves can remain connected to allow for tiger gene flow between them. This connection also reduces inbreeding and loss of genetic variation. Based on this finding, scientists have proposed conservation measures, including the use of green infrastructure to aid development and granting legal status and protections to these specific pathways. These actions would help restore habitat connectivity and safeguard the future of wild tiger survival.

Headquartered in Front Royal, Va., SCBI facilitates and promotes veterinary and reproductive research as well as conservation ecology programs based at Front Royal, the National Zoo and at field research stations and training sites worldwide. Its scientists are leaders in applying advanced biomedical approaches, including assisted reproductive technologies and germplasm cryopreservation, for enhancing the demographic and genetic diversity of endangered species. SCBI scientists train students to become leaders in the conservation field; Jhala is a former SCBI postdoctoral fellow and Yumnam is a former Fulbright fellow at SCBI, a partnership that has lasted two decades. The National Zoo and Conservation Biology Institute is a part of the Smithsonian Institution, the world's largest museum and research complex. 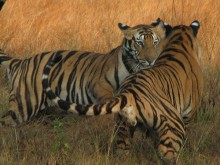