A new set of flippers splashed down at Smithsonian’s National Zoo, where American Trail keepers are celebrating the arrival of a California sea lion pup. Animal care staff are closely monitoring the pup—born June 23 at 11 p.m. to 14-year-old mother Calli—in an off-exhibit area. Keepers have observed the pup nursing, moving and vocalizing well, and they are cautiously optimistic that it will thrive. Because they are allowing the pair to bond without interference, it may be some time before keepers are able to determine the pup’s sex.

The Zoo received a recommendation to breed Calli and the pup’s 11-year-old father, Jetty, from the Association of Zoos and Aquariums’ Species Survival Plan (SSP). An SSP matches individual animals across the country for breeding in order to maintain a healthy, genetically diverse and self-sustaining population. The pair bred in June and July 2018; Jetty moved to Queens Zoo in New York in the fall of 2018. This pup is the third offspring for Calli and the second for Jetty.

Sea lions experience delayed implantation—also known as embryonic diapause—in which a fertilized egg, or blastocyst, may not implant in the uterine wall for several months following breeding. Females are not pregnant until the blastocyst implants. Animal care staff suspected that Calli was pregnant based on her physical changes, appetite and weight gain, among other cues. Keepers have trained the sea lions to voluntarily participate in radiographs and ultrasounds with veterinarians as part of their routine medical care. An April 10 radiograph confirmed Calli was pregnant, and animal care staff have been conducting intermittent ultrasounds to track the pup’s development.

Calli and her pup will remain off-exhibit until mom’s behavior indicates that she is ready to introduce the pup to the other three members of their colony. At that time, keepers will begin “howdy” introductions through a mesh barrier where the other sea lions will be able to see, smell and interact with mom and pup. Keepers are watching the pup to ensure that it is developing the swimming skills it needs to safely navigate the large pool in its habitat. Keepers anticipate that the pup will makes its debut at the American Trail exhibit by late summer.

Visitors can view three female sea lions—Summer, Sidney and the pup’s 2-year-old sibling, Catalina—at American Trail. The Zoo will continue to provide updates on the pup through Facebook, Twitter and Instagram.

Native to the West Coast of North America, California sea lions range from Baja, Mexico, to Vancouver Island, British Columbia. Though they were once hunted for their skin, the International Union for Conservation of Nature now classifies them as a species of least concern. 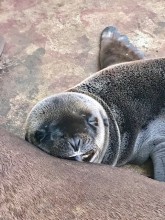