The zoo is open! All visitors will require free entry passes and be required to follow safety measures. Free timed-entry Asia Trail/Panda Passes are required for the giant panda viewing.

The Smithsonian Conservation Biology Institute (SCBI) welcomed a litter of seven chirping cheetah cubs July 9. The cubs were born to first-time mother, Erin. She has been attentive and immediately started caring for the cubs after they were born. The cubs appear to be healthy and doing well. Keepers will perform a health check on the cubs when Erin is comfortable leaving them for an extended period of time. In the meantime, the keepers will continue to monitor the mother and cubs closely through den cameras and visual checks to ensure they are growing and developing normally.

“It is really exciting to have such a large and healthy litter of cubs, especially from first-time parents,” said Adrienne Crosier, cheetah biologist. “Two of these cubs’ grandparents also live at SCBI, so they are the third generation from some of the first cheetahs to ever live and breed here. That’s really good news for the cheetah population worldwide. A global self-sustaining cheetah population in human care is becoming even more important with the continued decrease of animal numbers in the wild.”

The cubs are important to the population of cheetahs living in zoos because Erin’s genes are not well represented in the population of cheetahs living in human care in North America. This is also the first litter of cubs sired by the cubs’ father, Rico. It is the 12th cheetah litter bringing the number of cubs born at SCBI since 2010 to 53. Erin's cubs will likely move to other zoos or facilities accredited by the Association of Zoo and Aquariums (AZA) and join the AZA Cheetah Species Survival Plan.

SCBI scientists are using a new fecal hormone test to determine pregnancy in cheetahs.  Fecal samples from Erin will contribute to this research. Cheetah pregnancies last approximately 90 days, and it is difficult to tell if a female is pregnant until 60 days have passed. However, SCBI scientists are developing a non-invasive test to detect levels of IgJ, a protein synthesized by the immune system, in cheetah feces to determine if a female is pregnant in the first 30 days of her pregnancy.

Cheetahs are listed as “vulnerable” in the wild by the International Union for Conservation of Nature. There are only about 7,000 cheetahs in the wild living in very fragmented habitats. SCBI is building a healthy and genetically diverse population of cheetahs in human care using natural breeding and assisted reproduction techniques. 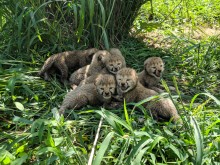 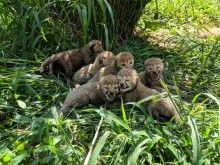 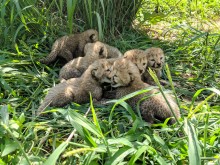