Mother’s Day was extra special for carnivore keepers at the Smithsonian Conservation Biology Institute (SCBI) in Front Royal, Virginia, who welcomed the year’s first litter of black-footed ferret kits Sunday. Two-year-old female Potpie gave birth throughout the morning May 10 to six kits. Staff are closely monitoring their behaviors via a soundless black-and-white webcam, which is now live on the Zoo’s website. Virtual visitors can observe the family on this temporary platform until the kits become more active and venture out of the den, around 40 days old. Depending on where Potpie chooses to rest in her den, the kits may be more or less visible on the webcam.

Animal care staff are leaving Potpie to bond with and care for her kits without interference, so it may be some time before they can determine the kits’ sexes. All six kits appear to be nursing, moving and vocalizing well.

Two-year-old male, Denver, who came to SCBI in fall 2018 from the U.S. Fish & Wildlife’s (USFWS) Ferret Center in Colorado, sired the kits. The pair received a breeding recommendation from the Association of Zoos and Aquariums’ Species Survival Plan. This is the second litter for Potpie and Denver, who contributed 12 kits to their species’ survival in 2019, each with different mates. Potpie is one of 19 female black-footed ferrets that reside at SCBI. Staff anticipate more births in the coming weeks.

Black-footed ferret kits are blind, weigh less than 10 grams and have a thin layer of white fur covering their bodies. Their signature mask-like markings around their eyes and dark markings on their feet will appear when they are about three weeks old. They will open their eyes at around 35 days old. At about 40 days old, they will begin venturing out of their den and exploring the tunnel systems in their enclosures that mimic the prairie dog burrows in which they live in the wild.

The kits will nurse for about a month but will quickly begin eating meat. Around four months old, the kits will separate from their mother. A genetic assessment of the entire black-footed ferret population managed in human care will be in conducted in August. This assessment will determine whether the kits remain at SCBI, are transferred to another breeding facility or join the USFWS pre-conditioning program in preparation for their release into the wild.

Black-footed ferrets were thought to be extinct in the wild until 1981 when the last colony was rediscovered near Meeteetse, Wyoming. Eighteen black-footed ferrets were brought into human care by USFWS and the Wyoming Game and Fish Department to prevent the species from going extinct. SCBI has participated in a cooperative breeding program for the species since 1988. More than 960 ferrets have been born at SCBI, 200 of which have been reintroduced to the wild.

SCBI scientists have helped increase the genetic diversity in the black-footed ferret population using artificial insemination and cryopreserving sperm. Cryopreserved and thawed sperm can inject a much-needed genetic boost into the population. Theoretically, these samples can be stored forever under the proper conditions. SCBI scientists have successfully artificially inseminated a female black-footed ferret with sperm frozen for 20 years.

As a public health precaution due to COVID-19, the Smithsonian’s National Zoo and Conservation Biology Institute is temporarily closed to the public. Animal keepers and veterinary staff remain working on site at the Zoo and SCBI to provide the usual highest quality care for the animals. Additional information on the Zoo’s COVID-19 response is posted to the Zoo’s website. During the closure, the Zoo is sharing animal updates from behind the scenes using the hashtag #NatZooZen on Facebook, Instagram and Twitter.

The Smithsonian’s National Zoo’s legacy of conservation work extends beyond the public Zoo in Washington, D.C., to SCBI in Front Royal, Virginia. Scientists at SCBI study and breed more than 20 species, including some that were once extinct in the wild, such as black-footed ferrets and scimitar-horned oryx. Animals thrive in specialized barns and building complexes spread over more than 3,200 acres. The sprawling environment allows for unique studies that contribute to the survival of threatened, difficult-to-breed species with distinct needs, especially those requiring large areas, natural group sizes and minimal public disturbance. 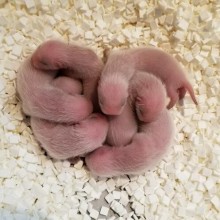