The Smithsonian’s National Zoo and Conservation Biology Institute is asking the public to help name the litter of four cheetah cubs born April 8 at the Smithsonian Conservation Biology Institute (SCBI) in Front Royal, Virginia. The births were streamed live on the Zoo’s new cheetah webcam, and virtual viewers have been watching them grow ever since. Keepers currently identify each cub by a small shave mark on their left shoulder (male), right hip (female), left hip (male) and base of the tail (male). Voters can select their favorite names from May 22 to May 26 on the Zoo’s website.

The names were selected from a list submitted to SCBI’s cheetah animal care team by staff from across the Zoo, SCBI and Friends of the National Zoo (FONZ), the Zoo’s membership organization. There are three possible name choices for the female cub and five choices for the three male cubs. The names that receive the most votes will be bestowed on the cubs. Keepers will assign the winning names to the individual animals. The winning names will be announced May 27.

The name choices for the female cub are:

The name choices for the three male cubs are:

The cubs were born to first-time mom, 5-year-old Echo and sired by 4-year-old Scott. Staff have been closely monitoring Echo and her cubs via the webcam. Keepers approached the cubs for the first time April 14. Less than a week later, the cubs were sexed and weighed. The cubs had their first vet exam May 20. Follow #CheetahCubdates on the Zoo’s Facebook, Instagram and Twitter to stay up-to-date on cheetah cub milestones.

The cheetah webcam is one of six live animal webcams hosted on the Zoo’s website. A downloadable animal webcam educational activity packet is available. As the cheetah cubs continue to grow, they will spend more time outside the den. If the cubs are not on the cam, the public can check out the photos and videos located on the cam’s page.

SCBI is part of the Cheetah Breeding Center Coalition—a group of 10 cheetah breeding centers across the United States that aim to create and maintain a sustainable North American cheetah population under human care. These cubs are a significant addition to the Association of Zoos and Aquariums’ Species Survival Plan for Cheetahs, as each individual contributes to this program. Earlier this year, SCBI experts performed a successful in vitro fertilization resulting in two cubs.

Cheetahs live in small, isolated populations mostly in sub-Saharan Africa. Many of their strongholds are in eastern and southern African parks. Due to human conflict, poaching and habitat- and prey-base loss, there are only an estimated 7,500 to 10,000 cheetahs left in the wild. The International Union for Conservation of Nature considers cheetahs vulnerable to extinction.

As a public health precaution due to COVID-19, the Smithsonian’s National Zoo and Conservation Biology Institute is temporarily closed to the public. Animal keepers and veterinary staff remain working on site at the Zoo and SCBI to provide the usual highest quality care for the animals. Due to the public closure, a COVID-19 Emergency Fund has been created as the Zoo is no longer receiving important funds on which it relies. Additional information on the Zoo’s COVID-19 response is posted to the Zoo’s website. During the closure, the Zoo is sharing animal updates from behind the scenes using the hashtag #NatZooZen on Facebook, Instagram and Twitter.

The Zoo’s legacy of conservation work extends beyond the public Zoo in Washington, D.C., to SCBI in Front Royal, Virginia. Scientists at SCBI study and breed more than 20 species, including some that were once extinct in the wild, such as black-footed ferrets and scimitar-horned oryx. Animals thrive in specialized barns and building complexes spread over more than 3,200 acres. The sprawling environment allows for unique studies that contribute to the survival of threatened, difficult-to-breed species with distinct needs, especially those requiring large areas, natural group sizes and minimal public disturbance. 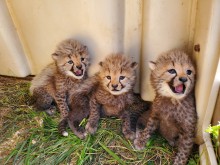 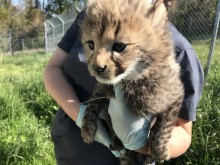