The Smithsonian Conservation Biology Institute (SCBI) welcomed a litter of three cheetah cubs Sept. 22. The cubs were born to first-time mother, Sukiri. She has been attentive and is caring for the cubs. Keepers have been remotely monitoring the family group through den cameras and visual checks, and the cubs appear to be healthy and doing well. Keepers will perform a health check on the cubs when Sukiri is comfortable leaving them for an extended period of time.

“It is especially exciting to see Sukiri bonding with and successfully raising these cubs,” said Adrienne Crosier, cheetah biologist at SCBI. “She and her brothers were hand-reared at SCBI as cubs because their mom was unable to care for them. We always want moms to raise their own cubs because it increases the probability that those cubs will breed and raise their own cubs as adults. Sukiri was clearly able to adapt and being hand-reared has not affected her ability to raise cubs at all.”

Sukiri and her brothers spent three months at SCBI’s veterinary hospital recovering from puncture wounds they received after their mother carried them aggressively. They needed multiple surgeries to help them recover. All three survived and have grown to be adults.

Sukiri’s cubs were sired by a male named Sampson. He moved to SCBI from a private breeding facility in South Africa in 2011. He is not related to many cheetahs living in zoos in North America, so his cubs will give the cheetahs managed by the Species Survival Plan a genetic boost. The SSP makes breeding recommendations for all cheetahs living in zoos accredited by the Association of Zoos and Aquariums based on relatedness and pedigree. It is building a self-sustaining and genetically diverse population of cheetahs in human care. Crosier currently serves as coordinator of the SSP. Since 2007, 13 litters of cheetah cubs have been born at SCBI, totaling 56 cubs, of which 44 have survived.

In addition to breeding cheetahs, SCBI scientists also study cheetah reproductive biology. Two of their newest studies focus on detecting pregnancy in females and the onset of puberty in male cheetahs. Fecal samples from Sukiri will contribute to the pregnancy detection research. Cheetah pregnancies last approximately 90 days, and it is difficult to tell if a female is pregnant until 60 days have passed. However, SCBI scientists are developing a noninvasive test to detect levels of IgJ, a protein synthesized by the immune system, in cheetah feces to determine if a female is pregnant in the first 30 days of pregnancy. They also published a study Sept. 26 which determined that the onset of puberty in male cheetahs occurs between 18 and 24 months of age. Scientists tracked fecal hormones and weights of the cheetahs involved in the study to determine when they were sexually mature. Now that scientists definitively know when puberty occurs, they can better separate males from their mothers and littermates and avoid missing the first years that they are able to breed.

Cheetahs are listed as “vulnerable” in the wild by the International Union for Conservation of Nature. There are only about 7,000 cheetahs in the wild living in very fragmented habitats. SCBI is building a healthy and genetically diverse population of cheetahs in human care using natural breeding and assisted reproduction techniques. 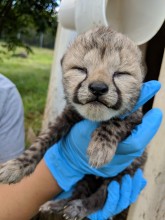 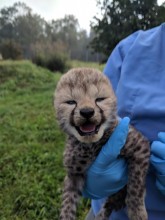 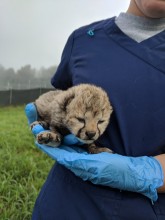